The myth of freedom in the land of the free

The US touts itself as the land of free, but it has laws which are designed to crush criticisms of the state. 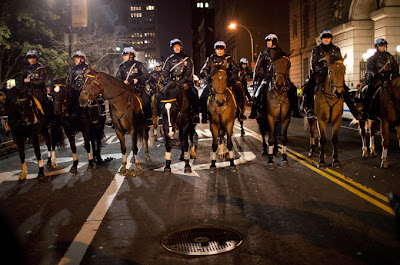 Since the terrorist attacks of 2001, the US has spent about $635bn to militarise the country's local police forces

In 1893, a massive financial panic sent demand for the Pullman Palace Car Company into a downward spiral. The luxury rail car company reacted by slashing workers' wages and increasing their work load. After negotiations with ownership broke down the following year, the American Railway Union, in solidarity with Pullman factory workers, launched a boycott that eventually shut down railroads across the US. It was a full-scale insurrection, as the late historian Howard Zinn put it, that soon "met with the full force of the capitalist state".

The US Attorney General won a court order to stop the strike, but the union and its leader, Eugene V Debs, refused to quit. President Grover Cleveland, over the objections of Illinois' governor, ordered federal troops to Chicago under the pretense of maintaining public safety. Soldiers fired their bayoneted rifles into the crowd of 5,000, killing 13 strike sympathisers. Seven hundred, including Debs, were arrested. Debs wasn't a socialist before the strike, but he was after. The event radicalised him. "In the gleam of every bayonet and the flash of every rifle," Debs said later on, "the class struggle was revealed".

I imagine a similar revelation for the tens of thousands of Americans who participated in last fall's Occupy Wall Street protests. As you know, the movement began in New York City and spread quickly, inspiring activists in the biggest cities and the smallest hamlets. Outraged by the broken promise of the US and inspired by democratic revolts of Egypt and Tunisia, they assembled to protest economic injustice and corrupt corporate power in Washington.

Yet the harder they pushed, the harder they were pushed back - with violence. Protesters met with police wearing body armour, face shields, helmets and batons; police legally undermined Americans' right to assemble freely with "non-lethal" weaponry like tear gas, rubber bullets and sonic grenades. There was no need for the president to call in the army. An army, as Mayor Bloomberg quipped, was already there.

Before Occupy Wall Street, many protesters were middle- and upper-middle class college graduates who could safely assume the constitutional guarantee of their civil liberties. But afterward, not so much. Something like scales fell from their eyes, and when they arose anew, they had been baptised by the fire of political violence.

Emmanuel Saez, an economist from UC Berkeley, tried to quantify that oppression. He found that during the first year of the recovery from the 2008 crisis 93 per cent of incomes gains went to the 1 per cent. "Top 1 per cent incomes grew by 11.6 per cent, while bottom 99 per cent incomes grew only by 0.2 per cent," he said in an update of a previous study. "... Such an uneven recovery can help explain the recent public demonstrations against inequality."

Moreover, income for the 99 per cent grew by 20 per cent from 1993-2000, but during the Bush years, it grew by only 6.8 per cent. It's worth saying again that this is not a natural occurrence of the free and open marketplace. The upward redistribution of wealth is the concrete result of politics and policy - one might even say socialism for the rich, capitalism for everyone else.

Or should I say authoritarianism for everyone else. Since the terrorist attacks of 2001, the US has spent about $635bn to militarise the country's local police forces. It's ostensibly an effort to better prepare communities in case of another attack. But, as Stephan Salisbury reportedrecently, there has been a cultural transformation, too. "The truth is that virtually the entire apparatus of government has been mobilised and militarised right down to the university campus." When the state makes a fetish of security, as the US has, it becomes hard to tell the difference between acts of civil disobedience and terrorism.

So it's tempting to say two currents conspired to increasingly limit the freedom of individuals in the land of the free. One is the funnelling of wealth upward so that the top 10 per cent owns and controls half the wealth. The other is the organising of state violence to protect the oligarchy in case anyone gets wise to what's happening. Perhaps there's a third: the executing of state violence in the name of security.

These collided in an instant in November. New York City cops, under the orders of a billionaire mayor to clear out Zuccotti Park, suppressed the rights of thousands of Americans who had been protesting the oligarchy's power over their lives. Later on, it was revealed that the real estate firm that owned the park had previously taken more than $174.5 million in tax-payer subsidies to rebuild after September 11. Not only was the state reacting to the threat of collective action; it was defrauding the public of its contractual right to use the park after having paid for it.

Given all this, I sense the depth of Zinn's line about "the full-force of the capitalist state". Occupy protesters aren't just facing local police; they are facing an entire system bent on breaking dissent and protecting the status quo. And I sense this is why Eugene Debs became a radical after experiencing such political violence. How can you play by the rules when the 1 per cent writes, and keeps rewriting, the rules? The only way to fight back is to fight back against the entire system.

In 1918, Debs visited three socialists in jail for dodging the World War I draft. Afterward, he walked across the street to give an impromptu speech that enraptured onlookers for hours. Because of this speech, Debs was eventually found guilty of violating the Espionage Act, a deeply un-American set of laws that are still in effect (in fact, the Obama administration is using the laws against Bradley Manning, who leaked secrets to WikiLeaks). These laws are designed to crush criticism of the state. The irony of Debs' time may be the irony of ours: "They tell us we live in this great free republic; that our institutions are democratic; that we are a free and self-governing people," Debs said to his audience. "That is too much, even for a joke."

John Stoehr is the editor of the New Haven Advocate and a lecturer at Yale.