Kid paralyzed by a bully's punch has been awarded a settlement of $4.2 million after proving the school knew about the bully's tendencies and did nothing to prevent his attack. 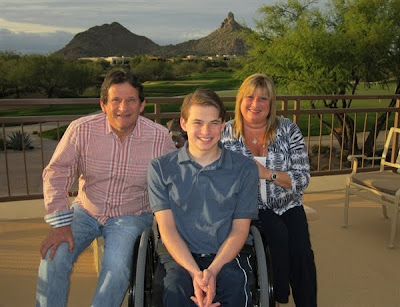 When Sawyer Rosenstein was 12, a punch from a bully changed his life forever, leaving him paralyzed, and at times, near death from the complications of his condition.

Now, six years after the assault, the New Jersey school board in the district where he was a student has agreed to a $4.2 million settlement.

“It feels really great to finally have just a sense of closure … that this really difficult part of my life is behind me,” Rosenstein, an 18-year-old freshman majoring in communication at Syracuse University, told msnbc.com. “I can actually focus on all of the successful things that I am doing now and all of the successful plans that I have for my future.”

“I see stories virtually, if not daily, every other day on bullying and … it’s one of the first stories where there actually was a result that’s positive and truly helps the family,” he told msnbc.com, noting that the Ramsey Board of Education does not admit liability.

“But the facts surrounding this case are unbelievable, I mean they’re dramatic in that you have a child who actually was pro-active” about dealing with the bullying, he said.

Youngman was referring to emails written by Rosenstein to officials at Eric Smith Middle School – a guidance counselor, an assistant principal – about the harassment.

"I would like to let you know that the bullying has increased," he wrote to his guidance counselor three months before the assault that left him paralyzed, in an email that was reported by The Record. "I would like to figure out some coping mechanisms to deal with these situations, and I would just like to put this on file so if something happens again, we can show that there was past bullying situations."

On May 16, 2006, a bully punched Rosenstein so hard that he fell to his knees. Two days later, he screamed out at home.

“We picked him up and called an ambulance,” his father told the newspaper. "He hasn't walked since."

Rosenstein was paralyzed from the waist down due to a clot that had formed after the blow in a major artery above his abdomen. When the clot moved down to his spine, it burst, leaving him paralyzed. Complications resulting from his paralysis, such as scoliosis, led to 19 surgeries and a complete spinal fusion. He almost died several times, Youngman said.

Rosenstein said he turned the corner during one of those hard days thinking “why me” after one of the many surgeries in which he considered his options.

He missed a year of school but still graduated on time and made the honor roll every semester, Youngman said.

“The way that he carries himself is just amazing, he's an inspiration,” he said.

In 2009, the Rosensteins filed their lawsuit against the school board, various administrators, other individuals and the boy who punched Sawyer; the settlement was agreed to at the end of March. Part of the family’s case included claims that school officials knew or should have known that Sawyer’s attacker had violent tendencies, Youngman said, citing prior punching incidents with others. The family settled with that student two years ago. The terms are confidential.

“What the school was doing was just indicative of what the schools do in these instances: they just have policies and don’t know how to enforce them,” Youngman said. “You can have a written policy all you want, but if it is not put into effect and it's not enforced effectively, you’ve got a policy in name only.”

In a statement, the Ramsey Board of Education said that after three years of depositions and pre-trial discovery, its insurance carriers agreed to the settlement.

“There has been no admission by the Board or by any of its employees of a violation of any law or duty owed to the Plaintiffs,” the statement said.

The board denied allegations that it or its employees had “failed or compromised its responsibility to develop and to implement effective policies and procedures to protect the safety and rights” of the school community, the statement continued, noting that the district "prides itself for the role which it has played in recognizing and developing an awareness of the dangers of bullying, intimidation and harassment in the school setting."

Sawyer Rosenstein only recently shared his story publicly after much long discussion with his family, deciding to do so to raise awareness. Otherwise, he doesn’t like telling his story.

“I don’t want it to be ‘woe is me’ and sympathy. I want it to be more of a story of success, that even with all this, I was still able to prevail,” he said. “I want people to root me on in whatever I’m doing and help me through it.”

He encouraged anyone suffering from bullying to document it as he had, believing

it was a key factor in making his case. Though he was constantly bullied and remembered how much he wanted it to stop, he wanted others to know that it does end.

Today, Rosenstein, who wants to be a news reporter, hosts and edits a podcast he helped to co-found called Talking Space. He said he attended the final space shuttle launch as the youngest ever accredited reporter at 17.

What he hopes that people will get out of his story is that they understand “this is an issue, this is something that needs to be taken care of, and this kid has taken something terrible and made something great out of it. I can do the same.”