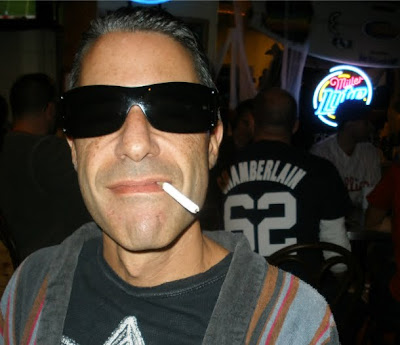 The next time you find yourself pounding your keyboard in frustration because the domain name you want is already taken, direct your ire toward Mike Mann.

Mann is one of the longest members of the clubby world of domain speculators, and he’s buying up names in force these days. And not all on the aftermarket, as some others do. But new names. Dot-com names that aren’t registered — even though 100 million-plus already are — that he then turns around and sells for a few hundred bucks, sometimes far more.

And this week, in a span that lasted less than 24 hours across Tuesday and Wednesday, Mann snapped up 14,962 domains — 1,822 starting Tuesday evening and the rest on Wednesday.

“I’m just really greedy,” said Mann, a man no one would describe as modest. “I want to own the world.”

First, the quick backstory. Mann, who’s 45 and lives in Delaware, joined the dot-com land grab relatively early, in the late 1990s. He had founded an ISP called Internet Interstate, but one day in 1998, much to his surprise, he got a $25,000 offer for a domain he owned, Menus.com. The following day he got a $50,000 offer.

“I was like, ‘I paid $70 for this,’” said Mann, who tends to sport dark glasses and, despite the outfit in the photo, doesn’t smoke cigarettes. “The next day, I went into the domain business.”

Mann went on to become one of the most aggressive domain speculators in a world that was — and still largely is — the digital Wild West. In the early years, registering good names wasn’t that hard, and some people made many, many millions doing just that.

But as time went on, it became far more difficult. The shrewdest (or craftiest) of the so-called domainers went to great lengths to bag their URL prey. They wrote scripts to pound on the registrars, working in the dark of night to “catch” names the nanosecond they expired, or “dropped.” (The king of the “drop catchers” was a mysterious man named Yun Ye, who built a portfolio he sold to the now-public Marchex in 2005 for $164 million.)

Some cut deals with small registrars so they could get direct connections to the names that were expiring — in effect, buying their way to the front of the line, as I documented in this piece, “The man who owns the Internet.” Helping to drive it all: Google and Yahoo, which supply the pay-per-click ads that fill so many undeveloped, or “parked,” sites that people land on by typing URLs directly into a browsers’ address bar.

Mann held his own — big time. He built up a business called BuyDomains that in 2005 he sold to Boston-based Highland Capital for about $80 million. That business is now called NameMedia, and it’s going strong, though in 2008 it pulled its planned IPO because of the economic meltdown. One thing that Mann sold to NameMedia: A patent he was awarded in 2003 for a system he developed to generate domain name recommendations and then register the domains.

In short, Mann came up with his own weapons. After he sold to NameMedia, of which he still owns a 15 percent stake, Mann had a noncompete that kept him away from the domain game for about four years. Instead, he worked on his many other ventures, such as SEO.com and a nonprofit called Grassroots.org.

But as soon as he could, he jumped back in. That was about two years ago, and ever since, he’s been buying an average of 300 names a day and selling them through his company, DomainMarket.com. That business, he said, brings in about $400,000 a month.

Over the last couple of months, however, cash flow got tight as he was focused on other businesses, so Mann held off buying names. He didn’t stop adding to his list of names to buy, however. It’s that list that turned into this week’s shopping spree.

“I haven’t heard of anyone doing an en masse splurge like that in several years,” said Ron Jackson, who runs Domain Name Journal, the trade site for the domain world.

So how did he do it? Part software power, part human power. He starts with a tool built in-house that, among other things, sifts through Google-friendly keywords, looks at traffic potential, filters out obvious trademark violators, and then ranks and scores possible names. Then comes the human part.

“We have a filter, but I’m the world’s most efficient human filter for this sort of thing,” said Mann, true to form. “I don’t think anyone can read huge lists of domain names as quickly as I can and understand what they’re reading. I’m a pattern reader. It’s a huge pain in the ass, but it’s what I do for a living.”

Then the machines take over. “The robot just goes to the registrars — buy, buy, buy,” he said.

While some big domainers run their own registrars, cutting out the likes of Go Daddy as middlemen so they can buy directly from VeriSign, which runs the registry, Mann does not. He registers his names through Go Daddy and several others. The cost of his two-day binge: Roughly $100,000.

These names are not Internet gold, mind you. They are not Sex.com, which sold for the highest price on record and, incidentally, which Mann was a part owner of for a while. They’re names like CeoHealthClub.com, ChineseFoodCatering.com, BaptistChurchCamp.com and DrugDevelopers.com — names that he’s confident he can sell for a decent profit.

“There’s these idiots that are questioning this, claiming I don’t know what I’m doing and throwing away my money,” said Mann. “The issue is whether this batch worth is 100K. Any professional can tell you yes.”

That’s astonishing confidence in a market this hard to predict. The value of names collapsed with the economy a few years ago, and demand dried up for all but the best names. And plenty of companies are glad to start their businesses with .CO or .ME names, or simply use quirky spellings so as not to pay the crazy prices demanded by greedy domainers, which is why Flickr and Digg are spelled the way they are.

Even so, I wouldn’t bet against Mann. Nor would I suggest trying this at home.