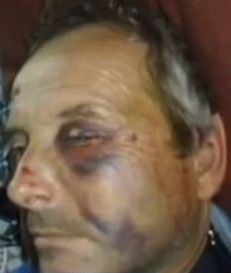 A Berkeley truck driver is suing the California High Patrol for a brutal assault that brought him to the brink of death — provoked, according to a report by the local NBC affiliate, only by the man’s request to read the ticket he was being given before he signed it.

On September 2nd, 2011, Russian immigrant Olegs Kozacenko was driving his truck when he was pulled over by Officer Andrew P. Murrill of the California Highway Police. Murrill attempted to ticket him for driving too many hours in the truck. Kozacenko refused to sign the ticket before reading it.
At this point, NBC Bay Area reporters learned, Murrill decided he needed to make a “forcible arrest.” He and his partner, Officer Jim Sherman, claim that Kozacenko was “actively resisting” and “exhibiting extraordinary strength” in doing so. The consequences were “life-threatening injuries including a crushed left orbital eye socket, multiple facial fractures, a broken left arm, a concussion, unconsciousness and possible neurological damage.”
Kozacenko nearly died, as the nearest hospital did not have an emergency room advanced enough to treat his injuries.
According to court testimony obtained by NBC, Murrill concedes that Kozacenko was not even guilty of the offense he was attempting to ticket the driver for:

In his testimony during an evidentiary hearing on a defense motion to suppress evidence gathered after the ticket was written, officer Murrill admitted that he was confused, either by the law governing the hour limits for truck drivers or by reading the truck driver’s log book. Murrill also admitted on the witness stand that he was not a trained commercial vehicle specialist and did not call to ask for a commercial vehicle specialist to help at the scene. And he admitted on the stand that the hours Murrill was reading on Kozacenko’s truck driver log book were recorded two days earlier when Kozacenko was driving through Nebraska, Iowa and Wyoming.

NBC reports that “the Valley Division, where Murrill works, led the state in the number of disciplinary actions against officers for 2011, the same year of Kozacenko’s arrest.” Police officials claim that there is no video of the altercation and that all associated radio logs have been deleted by system malfunctioning for this time period.”
Murrill and Sherman remain employed by the CHP. Olegs Kocazenko is currently unemployed and seeking legal redress from both the Highway Patrol and the state of California.
Posted by pooja