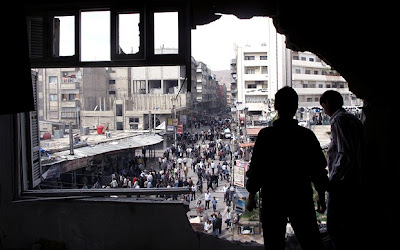 A bomb hidden in an army truck also exploded in the capital, wounding several people.

The persistent bloodshed has tarnished efforts by a U.N. team of observers to bolster a truce that the international community sees as the last-chance to prevent the country from falling into civil war.

U.N. monitors visited the restive Damascus suburb of Douma on Tuesday, their second visit in two days. Activists reported shelling and gunfire in the area on Tuesday. Amateur videos posted online also showed smoke rising into the sky after an explosion as well as men and young boys dashing for cover as gunfire is heard nearby.

The Britain-based Syrian Observatory for Human Rights said one intelligence officer was shot dead in the northeastern Barzeh neighbourhood of the capital Damascus. Also on Tuesday, the state news service said "terrorists" shot to death a retired lieutenant colonel and his brother, a chief warrant officer, in an area southwest of the capital.

Inside the city, explosives that were planted in an army truck blew up as the vehicle travelled through downtown. The blast in Marjah Square near the Iranian Cultural Center blew out the truck's windows, leaving a hole in its roof and blood and shattered glass on the road. The truck's driver and two passengers in a nearby car were injured and taken to a hospital

The state news service said an "armed terrorist group" had sabotaged the car by planting explosives under the driver's side.

No one immediately claimed responsibility for the attacks.

The 11-person monitoring team is in Syria to observe the ceasefire and prepare for a total of 300 monitors to arrive later. But some areas that have welcomed the observers with anti-government demonstrations have faced apparent retribution from the regime. At least 55 people were killed across Syria on Monday – most in the central city of Hama, a day after a visit by the observers.

Tuesday's attacks underlined the increasing militarisation of the conflict, which began in March 2011 as peaceful protests calling for political reforms with inspiration from successful revolts in Egypt and Tunisia. The government cracked down with massive force, deploying troops, snipers and pro-government thugs against the opposition, while regime opponents armed themselves for protection and joined forces with army defectors.

The U.N. says more than 9,000 people have been killed since the Syrian conflict began.

The international community remains divided on how to stop the conflict, with the U.S. and many Western nations calling for Assad to leave power while Russia and China have stood by Damascus.

All, however, have endorsed a six-point plan by envoy Kofi Annan that calls for a ceasefire that was to have gone into effect on April 12 to allow for talks between all sides on a political solution to the conflict.

Despite broad backing, the plan has been deeply troubled. The Syrian government has not withdrawn its troops from populated areas or allowed media access, and its troops have shelled opposition areas. Armed rebels, too, have continued to attack military convoys and checkpoints.

The regime cites such attacks in arguing that the uprising is the work of armed terrorists acting out a foreign conspiracy to weaken the country.

A Douma activist, Mohammed Saeed, said via Skype that he had heard the observers arrived in the Damascus suburb but had no information on their visit.

"The news here is very bad," he said. "There are tanks and shelling and gunfire and the army has prevented fire engines from entering."

Activist claims and videos could not be independently verified as the Syrian government has barred most media from working in the country.

Also on Tuesday, the U.N. food agency said it would deliver aid to 500,000 people in Syria, a tenfold increase since December, but warned around 1 million more people in the country still don't have enough to eat.

The World Food Program said that by the end of the month, it will provide food for 250,000 people with help from the Syrian Arab Red Crescent. It also said it would quickly double that "in the coming weeks," focusing on the cities of Homs, Hama, Idlib and Damascus.

The U.N. says 1.4 million people in Syria struggled to feed themselves even before the start of the conflict.
Posted by pooja