Syria's rebels said they had killed as many as 100 government soldiers in the most ferocious opposition offensive of the uprising against President Bashar al-Assad as they announced a formal repudiation of the UN-backed ceasefire. 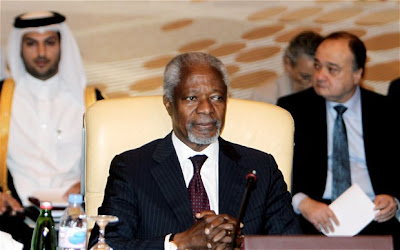 The Free Syrian Army declared that it was no longer bound by a ceasefire plan brokered by Kofi Annan, the UN and Arab League special envoy to Syria, who was yesterday struggling to salvage international backing for his efforts .

Rebel leaders said they had authorised the resumption of full-scale military operations after the Syrian leader ignored their ultimatum to comply with the terms of Mr Annan's plan by last Friday.

"We have decided to end our commitment to this (plan)," Maj Sami al-Kurdi, a spokesman for the Free Syrian Army, said.

Given free rein and determined to avenge the massacre of 108 people in the town of Houla last month, the rebels overran six army checkpoints in the northern province of Idlib, killing scores of soldier, and mounted a series of ambushes close to the capital Damascus. There were reports of operations elsewhere in the country as well.

The attacks killed at least 80 soldiers over the weekend alone, according to the Syrian Observatory for Human Rights, a pro-opposition watchdog, which said its death toll was based on reports from local doctors. The rebels themselves claimed to have killed more than 100 members of the security forces.

Mr Annan yesterday conceded that his plan is not being implemented by either side and may have to adjusted.

"The time may have to come to review the situation and the international community has to decide what measures it can take to ensure implementation of the plan," his spokesman, Ahmad Fawzi, said.

Mr Annan is due to hold talks with Hillary Clinton, the American Secretary of State, and Arab League officials in Washington on Friday but it is uncertain what scope for progress remains.

The surge in violence raised renewed fears that Syria was sliding ever closer to civil war, with the rebels' offensive likely lead to merciless retaliation both by Mr Assad's forces and by the pro-regime Shabiha militia accused of carrying out the Houla massacre and others like it. Fighting continued on Monday, although it was unclear to what extent the death toll had mounted.

While Mr Annan's six-point plan, which came into force on April 12th, never succeeded in ending hostilities, it did cause the bloodshed to recede a little.

But with both sides openly in defiance of the agreement, its survival will again be called into question.

Despite the setbacks, Arab League officials have privately spoken of their desire to see the plan broadened by bolstering the 300-monitor observer mission presently operating in Syria and giving them more sweeping powers.

Mr Annan indicated yesterday that he did not favour the proposal, which is likely to be rejected by the Syrian government in any case. It would also divide the international community.

Vladimir Putin, the Russian president, appeared to be in no mood to soften his support for the Syrian regime when he met European Union officials at a summit in St Petersburg yesterday.

Mr Putin failed to mention Syria at all and Sergei Lavrov, the Russian foreign minister, curtly rebuffed questions over a change in Russia's stance. He said: "I don't think so."

Efforts by Mrs Clinton in recent days to persuade Russia to agree to Mr Assad's departure were given short shrift.

Moscow has consistently refused to countenance any solution to the Syria crisis that involves a forced exit for Mr Assad, saying that such a solution would amount to interference in the affairs of a sovereign state.

"Russia has the ability to influence this regime and it has the ability to contribute to a rapid transfer of power," said Bassma Kodmani, the council's principal spokesman. "Russia has heard very clearly the demands and aspiration of the Syrian people. This is not a regime that it can continue to defend without losing its credibility."
Posted by pooja