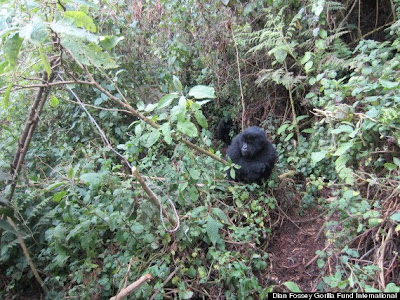 Poachers’ snares pose one of the biggest threats to mountain gorilla populations according to campaigners – and it seems that the gorillas themselves have worked this out, because they’ve been observed dismantling traps.

Field staff of the Dian Fossey Gorilla Fund in Rwanda report that on Monday they saw several young gorillas destroying snares – which maim and often kill gorillas – with their bare hands.

“We knew that gorillas do this but all of the reported cases in the past were carried out by adult gorillas, mostly silverbacks,” said Veronica Vecellio, gorilla program coordinator at the Karisoke Research Center.

“Today, two juveniles and one blackback worked together to deactivate two snares and how they did it demonstrated an impressive cognitive skill.”

Dian Fossey staff explained that just two days previously a juvenile called Ngwino was caught in a snare with the rope making severe cuts into her leg, resulting in gangrene.

She also dislocated her shoulder as she desperately tried to escape. 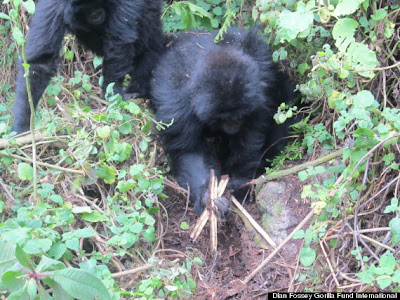 Fossey Fund staff intervened with vets from the Mountain Gorilla Veterinary Project but were unable to save her.

Hers is the second death this year resulting from a gorilla being caught in a poacher’s snare.

Since the gorillas were moving in that direction, he decided to deactivate it.

A silverback called Vuba pig-grunted at him - a vocalisation of warning - and at the same time juveniles called Dukore and Rwema together with a blackback called Tetero ran toward the snare and together pulled the branch used to hold the rope.

They saw another snare nearby and as quickly as before they destroyed the second branch and pulled the rope out of the ground.

Four other snares were also removed by Dian Fossey trackers in the same area.

“Our battle to detect and destroy snares from the park is far from over, however, and the recent death of Ngwino, has given us all further motivation. Today we can proudly confirm that gorillas are doing their part too,” said Felix Ndagijimana, director of the Karisoke Center.