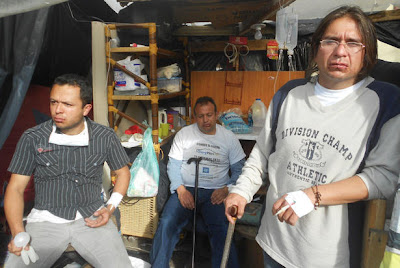 Nine days into a hunger strike in which he has sewn shut his mouth, Jorge Parra, a former worker for General Motors in Colombia, says his condition is deteriorating. “I have terrible pains in my stomach, my lips are swollen and sore, and I am having problems sleeping,” he says. “But I will not give up.”

The 35-year-old is one of a group of men who say they were fired after suffering severe workplace injuries at GM’s Bogota factory, Colmotores, and have taken drastic action to demand compensation.

After protesting for a year outside the United States embassy with no results, four of the ex-workers sewed shut their mouths on August 1, followed by another three men a week later. More will undergo the procedure every week until their complaints are answered, they say.

“We are all totally prepared to die,” says Parra, whose lips are sewn tight enough to prevent chewing, but not so tight he can’t speak with some degree of difficulty.

Parra claims nine years soldering and doing other metal work for GM left him with herniated discs, severe carpal tunnel syndrome and tearing in muscles around his upper spine.

The Association of Injured Workers and Ex-Workers of Colmotores (Asotrecol), which Parra set up, says GM erased company medical records and failed to compensate employees who were injured on the job — claims the car company denies.

“GM Colmotores is respectful of the law and has never put the health or the well-being of its employees at risk,” it said in a statement. “Furthermore, the company would like to reassure and reaffirm that no employee has been discharged for health reasons.”

Asotrecol says otherwise, claiming debilitating spinal and muscular injures are common among the hundreds of workers that carry out physical, repetitive tasks at the automotive plant that employs 1,800 near Colombia’s capital city. Instead of providing medical care and alternative work for its injured employees, GM fires them, it alleges.

“I worked for Colmotores for 11 years before they sacked me,” says Manuel Ospina, a father of five whose lips are also bound with six stitches. He claims a fall while carrying equipment seriously damaged his spine, in an injury that deteriorated to the point that he could barely walk.

“The company doctor told me when I was first injured that we would not report it to the insurers so that I could keep my job,” he claims. “When it got worse and I couldn’t walk, I started asking Colmotores to do something. After five complaints, I was fired.”

The men say it is almost impossible to find work as a disabled person in Colombia, despite the fact many of them are qualified engineers. They have two demands: that Colmotores meets their medical costs and reintegrates them into the workforce.

For its part, GM said that it “has addressed each of the cases of the group of protesters and has proactively and transparently participated in various dialogues with former employees and the relevant authorities.”

Asotrecol says their treatment is an illustration of the appalling labour abuses that persist in Colombia, for years the world’s most dangerous place to be a trade unionist. They chose to set up a permanent camp outside the U.S. embassy in order to highlight the failure of the U.S. to hold Colombia to account for promised improvements.

A Labor Action Plan signed between the two nations as part of a recently ratified Free Trade Agreement (FTA) obliged Colombia to take “major, swift and concrete steps” to improve workers’ rights before the FTA could go ahead, but it has been mostly ignored by both governments and multinational companies, says Asotrecol.

The men are the latest demonstrators to sew their mouths shut as a form of protest. Iranian asylum seekers in the U.K., indigenous islanders in Indonesia and prisoners in Kyrgyzstan are among the other protesters who have resorted to this extreme form of hunger strike in recent years.

“We are all in a lot of pain but we will not give up,” says Ospina. “The more pain we suffer here every day, the more hunger we feel, hopefully we can force people to take notice.”

Witness For Peace, a U.S. NGO supporting Asotrecol, says the fact the U.S. gave GM a $50-billion bailout in 2009 makes this case “even more incredible.”

Austin Robles, a Witness for Peace Colombia team member, says, “The U.S. promised it would improve labour rights in Colombia, yet it is actually a major shareholder in GM, a company which is a case in point for Colombian labour rights violations.”

GM says that, of the ex-employees who have filed legal claims, 95 per cent of the cases have been resolved in GM’s favour. Asotrecol blames the Colombian government and GM’s “corruption.”

“It’s not just bullets that kill but people’s indifference and eagerness to forget what we are suffering,” says Parra, who has undergone three surgeries for the injuries he claims were caused by his work. “We are now in a critical situation and we had to do something serious.”