The everyday life of drone pilots in upstate New York, killing people 7,000 miles away in Afghanistan 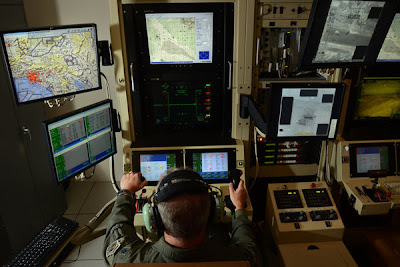 From his computer console here in the Syracuse suburbs, Col. D. Scott Brenton remotely flies a Reaper drone that beams back hundreds of hours of live video of insurgents, his intended targets, going about their daily lives 7,000 miles away in Afghanistan. Sometimes he and his team watch the same family compound for weeks.

When the call comes for him to fire a missile and kill a militant — and only, Colonel Brenton said, when the women and children are not around — the hair on the back of his neck stands up, just as it did when he used to line up targets in his F-16 fighter jet.

Afterward, just like the old days, he compartmentalizes. “I feel no emotional attachment to the enemy,” he said. “I have a duty, and I execute the duty.”

Drones are not only revolutionizing American warfare but are also changing in profound ways the lives of the people who fly them.

Colonel Brenton acknowledges the peculiar new disconnect of fighting a telewar with a joystick and a throttle from his padded seat in American suburbia.

When he was deployed in Iraq, “you land and there’s no more weapons on your F-16, people have an idea of what you were just involved with.” Now he steps out of a dark room of video screens, his adrenaline still surging after squeezing the trigger, and commutes home past fast-food restaurants and convenience stores to help with homework — but always alone with what he has done.

“It’s a strange feeling,” he said. “No one in my immediate environment is aware of anything that occurred.”

Routinely thought of as robots that turn wars into sanitized video games, the drones have powerful cameras that bring war straight into a pilot’s face.

Although pilots speak glowingly of the good days, when they can look at a video feed and warn a ground patrol in Afghanistan about an ambush ahead, the Air Force is also moving chaplains and medics just outside drone operation centers to help pilots deal with the bad days — images of a child killed in error or a close-up of a Marine shot in a raid gone wrong.

Among the toughest psychological tasks is the close surveillance for aerial sniper missions, reminiscent of the East German Stasi officer absorbed by the people he spies on in the movie “The Lives of Others.” A drone pilot and his partner, a sensor operator who manipulates the aircraft’s camera, observe the habits of a militant as he plays with his children, talks to his wife and visits his neighbors. They then try to time their strike when, for example, his family is out at the market.

“They watch this guy do bad things and then his regular old life things,” said Col. Hernando Ortega, the chief of aerospace medicine for the Air Education Training Command, who helped conduct a study last year on the stresses on drone pilots. “At some point, some of the stuff might remind you of stuff you did yourself. You might gain a level of familiarity that makes it a little difficult to pull the trigger.”

Of a dozen pilots, sensor operators and supporting intelligence analysts recently interviewed from three American military bases, none acknowledged the kind of personal feelings for Afghans that would keep them awake at night after seeing the bloodshed left by missiles and bombs. But all spoke of a certain intimacy with Afghan family life that traditional pilots never see from 20,000 feet, and that even ground troops seldom experience.

“You see them wake up in the morning, do their work, go to sleep at night,” said Dave, an Air Force major who flew drones from 2007 to 2009 at Creech Air Force Base in Nevada and now trains drone pilots at Holloman Air Force Base in New Mexico. (The Air Force, citing what it says are credible threats, forbids pilots to disclose their last names. Senior commanders who speak to the news media and community groups about the base’s mission, like Colonel Brenton in Syracuse, use their full names.)

Some pilots spoke of the roiling emotions after they fire a missile. (Only pilots, all of them officers, employ weapons for strikes.)

“There was good reason for killing the people that I did, and I go through it in my head over and over and over,” said Will, an Air Force officer who was a pilot at Creech and now trains others at Holloman. “But you never forget about it. It never just fades away, I don’t think — not for me.”

The complexities will only grow as the military struggles to keep up with a near insatiable demand for drones. The Air Force now has more than 1,300 drone pilots, about 300 less than it needs, stationed at 13 or more bases across the United States. They fly the unmanned aircraft mostly in Afghanistan. (The numbers do not include the classified program of the C.I.A., which conducts drone strikes in Pakistan, Somalia and Yemen.) Although the Afghan war is winding down, the military expects drones to help compensate for fewer troops on the ground.

By 2015, the Pentagon projects that the Air Force will need more than 2,000 drone pilots for combat air patrols operating 24 hours a day worldwide. The Air Force is already training more drone pilots — 350 last year — than fighter and bomber pilots combined. Until this year, drone pilots went through traditional flight training before learning how to operate Predators, Reapers and unarmed Global Hawks. Now the pilots are on a fast track and spend only 40 hours in a basic Cessna-type plane before starting their drone training.

Many drone pilots once flew in the air themselves but switched to drones out of a sense of the inevitable — or if they flew cargo planes, to feel closer to the war. “You definitely feel more connected to the guys, the battle,” said Dave, the Air Force major, who flew C-130 transport planes in Iraq and Afghanistan.

Now more and more Air National Guard bases are abandoning traditional aircraft and switching to drones to meet demand, among them Hancock Field, which retired its F-16s and switched to Reapers in 2010. Colonel Brenton, who by then had logged more than 4,000 hours flying F-16s in 15 years of active duty and a decade in Syracuse deploying to war zones with the Guard, said he learned to fly drones to stay connected to combat. True, drones cannot engage in air-to-air combat, but Colonel Brenton said that “the amount of time I’ve engaged the enemy in air-to-ground combat has been significant” in both Reapers and F-16s.

“I feel like I’m doing the same thing I’ve always done, I just don’t deploy to do it,” he said. Now he works full time commanding a force of about 220 Reaper pilots, sensor operators and intelligence analysts at the base.

Pilots say the best days are when ground troops thank them for keeping them safe. Ted, an Air Force major and an F-16 pilot who flew Reapers from Creech, recalled how troops on an extended patrol away from their base in Afghanistan were grateful when he flew a Reaper above them for five hours so they could get some sleep one night. They told him, “We’re keeping one guy awake to talk to you, but if you can, just watch over and make sure nobody’s sneaking up on us,” he recalled.

All the operators dismiss the notion that they are playing a video game. (They also reject the word “drone” because they say it describes an aircraft that flies on its own. They call their planes remotely piloted aircraft.)

“I don’t have any video games that ask me to sit in one seat for six hours and look at the same target,” said Joshua, a sensor operator who worked at Creech for a decade and is now a trainer at Holloman. “One of the things we try to beat into our crews is that this is a real aircraft with a real human component, and whatever decisions you make, good or bad, there’s going to be actual consequences.”

In his 10 years at Creech, he said without elaborating, “I’ve seen some pretty disturbing things.”

All of the pilots who once flew in cockpits say they do miss the sensation of flight, which for Colonel Brenton extends to the F-16 flybys he did for the Syracuse Memorial Day parade downtown. To make up for it, he sometimes heads out on weekends in a small propeller plane, which he calls a bug smasher.