The wife of a slave owner's letter to a runaway, and the subsequent rebuttal 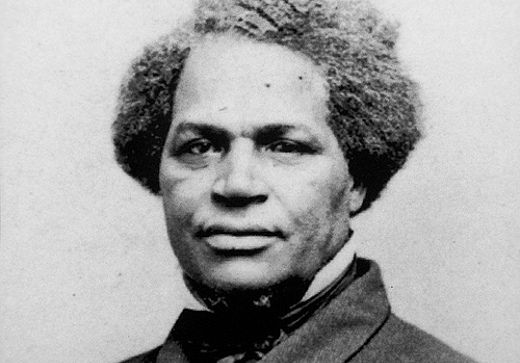 In 1834, 21-year-old Jarm Logue (pictured above some years later) managed to steal his master's horse and escape the life of slavery into which he had been born. Sadly, his mother, brother and sister remained. 26 years later, by which time he had settled down in New York, opened numerous schools for black children, started his own family, become a reverend and noted abolitionist, and authored an autobiography, he received a letter from the wife of his old owner in which she demanded $1000.

That letter, and his furious reply, can be read below.

I now take my pen to write you a few lines, to let you know how well we all are. I am a cripple, but I am still able to get about. The rest of the family are all well. Cherry is as well as Common. I write you these lines to let you the situation we are in—partly in consequence of your running away and stealing Old Rock, our fine mare. Though we got the mare back, she was never worth much after you took her; and as I now stand in need of some funds, I have determined to sell you; and I have had an offer for you, but did not see fit to take it. If you will send me one thousand dollars and pay for the old mare, I will give up all claim I have to you. Write to me as soon as you get these lines, and let me know if you will accept my proposition. In consequence of your running away, we had to sell Abe and Ann and twelve acres of land; and I want you to send me the money that I may be able to redeem the land that you was the cause of our selling, and on receipt of the above named sum of money, I will send you your bill of sale. If you do not comply with my request, I will sell you to some one else, and you may rest assured that the time is not far distant when things will be changed with you. Write to me as soon as you get these lines. Direct your letter to Bigbyville, Maury County, Tennessee. You had better comply with my request.

I understand that you are a preacher. As the Southern people are so bad, you had better come and preach to your old acquaintances. I would like to know if you read your Bible? If so can you tell what will become of the thief if he does not repent? and, if the the blind lead the blind, what will the consequence be? I deem it unnecessary to say much more at present. A word to the wise is sufficient. You know where the liar has his part. You know that we reared you as we reared our own children; that you was never abused, and that shortly before you ran away, when your master asked if you would like to be sold, you said you would not leave him to go with anybody.

Yours of the 20th of February is duly received, and I thank you for it. It is a long time since I heard from my poor old mother, and I am glad to know she is yet alive, and, as you say, "as well as common." What that means I don't know. I wish you had said more about her.

You are a woman; but had you a woman's heart you could never have insulted a brother by telling him you sold his only remaining brother and sister, because he put himself beyond your power to convert him into money.

You sold my brother and sister, ABE and ANN, and 12 acres of land, you say, because I ran away. Now you have the unutterable meanness to ask me to return and be your miserable chattel, or in lieu thereof send you $1000 to enable you to redeem the land, but not to redeem my poor brother and sister! If I were to send you money it would be to get my brother and sister, and not that you should get land. You say you are a cripple, and doubtless you say it to stir my pity, for you know I was susceptible in that direction. I do pity you from the bottom of my heart. Nevertheless I am indignant beyond the power of words to express, that you should be so sunken and cruel as to tear the hearts I love so much all in pieces; that you should be willing to impale and crucify us out of all compassion for your poor foot or leg. Wretched woman! Be it known to you that I value my freedom, to say nothing of my mother, brothers and sisters, more than your whole body; more, indeed, than my own life; more than all the lives of all the slaveholders and tyrants under Heaven.

You say you have offers to buy me, and that you shall sell me if I do not send you $1000, and in the same breath and almost in the same sentence, you say, "you know we raised you as we did our own children." Woman, did you raise your own children for the market? Did you raise them for the whipping-post? Did you raise them to be driven off in a coffle in chains? Where are my poor bleeding brothers and sisters? Can you tell? Who was it that sent them off into sugar and cotton fields, to be kicked, and cuffed, and whipped, and to groan and die; and where no kin can hear their groans, or attend and sympathize at their dying bed, or follow in their funeral? Wretched woman! Do you say you did not do it? Then I reply, your husband did, and you approved the deed—and the very letter you sent me shows that your heart approves it all. Shame on you.

But, by the way, where is your husband? You don't speak of him. I infer, therefore, that he is dead; that he has gone to his great account, with all his sins against my poor family upon his head. Poor man! gone to meet the spirits of my poor, outraged and murdered people, in a world where Liberty and Justice are MASTERS.

But you say I am a thief, because I took the old mare along with me. Have you got to learn that I had a better right to the old mare, as you call her, than MANNASSETH LOGUE had to me? Is it a greater sin for me to steal his horse, than it was for him to rob my mother's cradle and steal me? If he and you infer that I forfeit all my rights to you, shall not I infer that you forfeit all your rights to me? Have you got to learn that human rights are mutual and reciprocal, and if you take my liberty and life, you forfeit your own liberty and life? Before God and High Heaven, is there a law for one man which is not a law for every other man?

If you or any other speculator on my body and rights, wish to know how I regard my rights, they need but come here and lay their hands on me to enslave me. Did you think to terrify me by presenting the alternative to give my money to you, or give my body to Slavery? Then let me say to you, that I meet the proposition with unutterable scorn and contempt. The proposition is an outrage and an insult. I will not budge one hair's breadth. I will not breathe a shorter breath, even to save me from your persecutions. I stand among a free people, who, I thank God, sympathize with my rights, and the rights of mankind; and if your emissaries and venders come here to re-enslave me, and escape the unshrinking vigor of my own right arm, I trust my strong and brave friends, in this City and State, will be my rescuers and avengers.