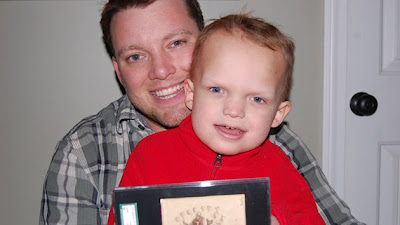 The man who purchased one of the earliest-known baseball cards in the country said he will list it on eBay and use the profits for his sick son.
Jason LeBlanc, 36, was the highest bidder in an auction on Wednesday for an 1865 baseball card of the Brooklyn Atlantics. Described as one of the first baseball cards in the country, a similar baseball card captured from the same camera that took LeBlanc's card is said to be in the Library of Congress.
LeBlanc, a retail consultant from Hamilton, Mass., is a baseball card collector who also sells collectibles on eBay. "It's an amazing piece of American history," he said.
Hamilton said the card was "a great investment for the future."
His son, Alex, 4, goes to the Boston Children's hospital on an almost weekly basis for health reasons. LeBlanc's wife and Alex's mother died when Alex was born.
"We've really had to struggle over the past 4.5 years of his life," LeBlanc said. "I thought this would be a unique and strong investment vehicle to cash in one day when Alex is in need."
LeBlanc said his son has seizures, brittle bones and severe developmental delays. He said his condition is similar to Angelman syndrome, a neuro-genetic disorder that is sometimes misdiagnosed with cerebral palsy or autism, according to the Angelman Syndrome Foundation.
"Alex is all I have," he said.
LeBlanc said he hopes to list the baseball card on eBay soon or lend it to the Baseball Hall of Fame in Cooperstown, N.Y.
"I think it's worth a lot more than I what I paid for it. And I hope I'm right," LeBlanc said, adding that estimates prior to the auction ranged from $50,000 to hundreds of thousands of dollars.
The card is already in a safe deposit box in a bank.
"It sits in a box and there is no reason for me to take it out," he said. "It gives me anxiety."
Posted by pooja