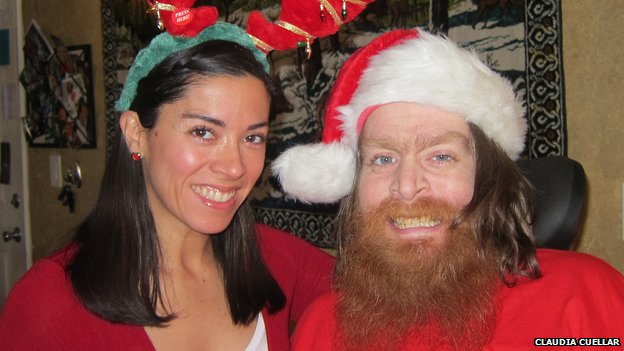 An Iraq war veteran who lost the use of his legs in the conflict has decided to end his life. Tomas Young has also written a letter to former President George W Bush and ex-Vice-President Dick Cheney, accusing them of being responsible for what happened to him and others injured and killed in Iraq.
When President Bush stood on the rubble of Ground Zero just after the 9/11 attacks in 2001 and pledged to go after those responsible, Tomas Young, 22, took up the call and joined the US Army.
But instead of being deployed to Afghanistan to fight al-Qaeda and its allies, he ended up in Iraq in 2004 following Saddam Hussein's capture by coalition forces.
On the fifth day into his deployment, Mr Young's unit came under fire from insurgents in Baghdad. He was hit and his spine was severed.
After his return to the US he campaigned from his wheelchair against the conflict and in 2007 was the subject of a documentary, Body of War.
But now his condition has deteriorated to such an extent that he wants to put an end to his suffering.
"He felt he's gone as far as his physical shell will take him and he is ready to rest," his wife, Claudia Cuellar, tells BBC World Service, speaking on his behalf because he has difficulty talking and tires easily.
"We accepted a certain level of suffering," she says. But last year his pain and discomfort increased dramatically and he grew weary of repeated hospital visits to treat infections and other ailments.
"He didn't want to do any more procedures or surgeries," Ms Cuellar says.
"I felt like I was losing him emotionally and psychologically. I felt that it was just too hard to get through the course of a single day and we had to have the conversation that people have when..." she said, not finishing her sentence.

"I could sense that he was suffering to a level that just wasn't right for us as a couple. I can keep him around for me, but that isn't fair to his journey.
"It's not that he wants to die - he simply doesn't want to suffer any more," Ms Cuellar says.
But she adds: "He's the person I love the most in the whole world. I will miss this person."
In 2008 Mr Young suffered a pulmonary embolism and an anoxic brain injury due to a reduced oxygen supply that impaired his speech and arm movement. A colostomy operation last year provided only temporary relief.
Unable now to eat solid food, he is fed through a tube in his stomach. The skin on his hips is breaking down, exposing raw flesh and bone.
"That's probably the toughest one for me, to see that deterioration," she says.
Medical marijuana eases his discomfort and gives him peace of mind without the side effects of pharmaceutical drugs, Ms Cuellar says.
Mr Young says he wrote to Mr Bush and Mr Cheney on behalf of the wounded veterans and relatives of those killed and injured in Iraq.
"On every level - moral, strategic, military and economic - Iraq was a failure. And it was you, Mr Bush and Mr Cheney, who started this war. It is you who should pay the consequences.
"My day of reckoning is upon me. Yours will come. I hope you will be put on trial. But mostly I hope, for your sakes, that you find the moral courage to face what you have done to me and to many, many others who deserved to live. I hope that before your time on earth ends, as mine is now ending, you will find the strength of character to stand before the American public and the world, and in particular the Iraqi people, and beg for forgiveness."

Continue reading the main storyCuellar says of the letter: "We just want to share the story of our struggle, which is the story of the struggle and suffering of so many, so that we can begin to look at the realities of the consequences of war."

She says Mr Young, who is virtually bedridden and in hospice care, cannot legally be helped to commit suicide in Missouri and so will have to starve himself to death.Ms Cuellar moved to Kansas City to be with Mr Young after they met while he was in hospital in her hometown, Chicago, in 2008.
He will continue to take food and liquids until their first wedding anniversary on 20 April. After that they will stop talking publicly about his case and spend time together until they feel the time is right for him to end his life.
Posted by pooja