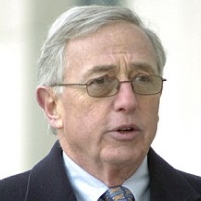 Accused of perpetrating a “profound evil,” former Pennsylvania judge Mark Ciavarella Jr. has been sentenced to 28 years in prison for illegally accepting money from a juvenile-prison developer while he spent years incarcerating thousands of young people.
Prosecutors said Ciavarella sent juveniles to jail as part of a “kids for cash” scheme involving Robert Mericle, builder of the PA and Western PA Child Care juvenile detention centers. The ex-judge was convicted in February of 12 counts that included racketeering, money laundering, mail fraud and tax evasion.
In addition to his prison sentence, Ciavarella was ordered to pay nearly $1.2 million in restitution.
At his sentencing, Ciavarella acknowledged his illegal acceptance of money from Mericle. But he denied ever jailing a juvenile in exchange for money.
Once the case against Ciavarella surfaced, special investigative panels began reviewing cases he handled from 2003 to 2008. The Pennsylvania Supreme Court concluded that he denied about 5,000 juveniles, some as young as ten, their constitutional rights, leading to the vacating of their convictions.
Among the young people exploited by Ciavarella were 15-year-old Hillary Transue, who was sentenced to three months at a juvenile detention center for mocking an assistant principal on a MySpace page; and 13-year-old Shane Bly, who was sent to a boot camp for two weekends after being accused of trespassing in a vacant building.
Another judge, Michael T. Conahan, used his position to shut down the county-run juvenile detention center and redirect juvenile detainees to the private prisons. He pleaded guilty to racketeering conspiracy.
Posted by pooja