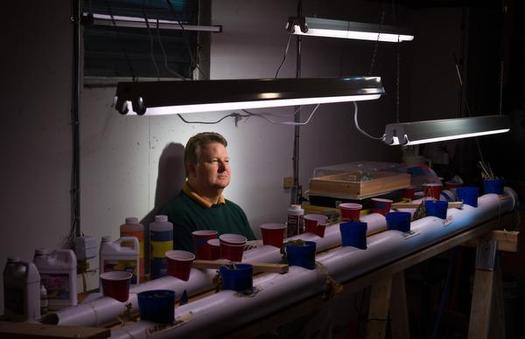 It took eight months for authorities to decide to raid the Leawood home of Robert and Adlynn Harte for drugs.
And then it took a year for the Hartes to find out why sheriff’s deputies thought they had drugs in the first place.
The Hartes finally have the court documents to explain it, and they show the raid was prompted by two events:
The Hartes’ visit to a hydroponics store, and tests that deputies did on some leaves they found in the Hartes’ trash.
Those tests, the documents show, later proved to be inaccurate. In fact, the Hartes think the leaves were tea.
In all, say a law professor and two attorneys, the evidence for the raid was flimsy at best.
As for the Hartes, they were both ecstatic and angry on Friday.
“On the one hand, it’s a bit of a relief to know we are not crazy, to know what actually went on,” said Adlynn Harte, an attorney who with her husband had filed a lawsuit in March to get the records.
“But then it is disheartening. We put our faith in law enforcement to do good police work, and we had to suffer through this for the last year.”
Lawrence L. Ferree III, a private attorney representing the Johnson County Sheriff’s Department, said there would be no comment on any aspect of the case because of the pending litigation.
The Hartes had fought for a year to get law enforcement records that would show why a Johnson County tactical team chose their house in an upscale subdivision to search for marijuana. This week, the sheriff’s department turned over the records.
The Hartes feel exonerated. They hadn’t been charged after the raid, and now they — and their neighbors — know that deputies ultimately had no evidence against them.
Events played out this way:

•  Robert Harte and his two children visited a Kansas City hydroponic store in August 2011, according to the documents. (Hydroponic stores sell equipment for indoor gardening.) Harte left with a small bag of merchandise. Deputies found out in March 2012 about his visit from Missouri Highway Patrol Sgt. Jim Wingo, who said he had a record of Harte’s license plate being spotted at the store. Mark Burns, a deputy sheriff, later used the visit as evidence in the affidavit, saying the equipment is commonly used to grow marijuana.
•  Eight months after the visit to the store, deputies pulled trash bags three times from the Hartes’ trash can when they placed it at the end of their driveway, according to the documents. About a cup of a leafy green substance that deputies believed to be marijuana was found in each of two trash bags. They conducted a field test on the material, and it tested positive for marijuana.
•  The Harte house was searched April 20, 2012, a date that has been known as a long-celebrated marijuana holiday. Area law enforcement officers were conducting several searches as part of a sting in a response to pot smokers’ blatant flaunting of the law.
Ten search warrants were served that day, and the Hartes’ home was one.
When the tactical-dressed deputies arrived at the home in the 10300 block of Wenonga Lane, Robert Harte was forced to lie shirtless on the foyer while a deputy with an assault rifle stood over him, according to the Harte’s lawsuit. The children, a 7-year-old girl and 13-year-old boy, reportedly came out of their bedrooms terrified, the teenager with his hands in the air.
•  But a lab test done 10 days after the raid and again four months later in August found that the leafy material was not marijuana.
“It does not look anything like marijuana leaves or stems,” a lab report said.
Still the sheriff’s department never told the Hartes despite their requests for answers and records over the past year.
Melanie Wilson, a law professor at the University of Kansas, said there is a low bar for evidence needed to justify a search, but that even then the Harte search raised questions. The positive field tests were evidence, but the information about the visit to the hydroponics store was old.
“If the standard (for a search) was met, it was barely met,” Wilson said.
Max E. Kautsch, a Lawrence attorney, said the warrant didn’t contain enough allegations to lead a reasonable person to believe that crimes were being committed on the premises.
Usually that takes some deeper involvement by detectives to learn who is visiting the home, what their habits are and who their friends and associates are, said Tai J. Vokins, a Johnson County criminal and civil rights attorney.
“If they had done some more checking on these people, or maybe they had just asked them, they would have found out it’s no big deal,” Vokins said. “For law enforcement to have time to troll gardening stores and find out who is buying a light kit and mill through people’s trash in hopes they might find something is troublesome. I think everybody should be concerned.”
Johnson County District Judge James Franklin Davis would not specifically address the Harte case, which he was not involved in, but said that a search warrant affidavit should not be judged on just one or two pieces of evidence cited. Often it contains many facts and important context, he said.
The Hartes believe the green leafy plant material deputies found was tea. Adlynn Harte makes a big container of freshly brewed tea daily.
“When we realized it might have been actually tea, the absurdity of it is unbelievable,” Adlynn Harte said.
“We have tried the last year, trying desperately, racking every part of our brain, trying to figure out what could have led them to our house. How did anything incriminating get onto our property? We have tortured ourselves trying to figure this out.”
Posted by pooja