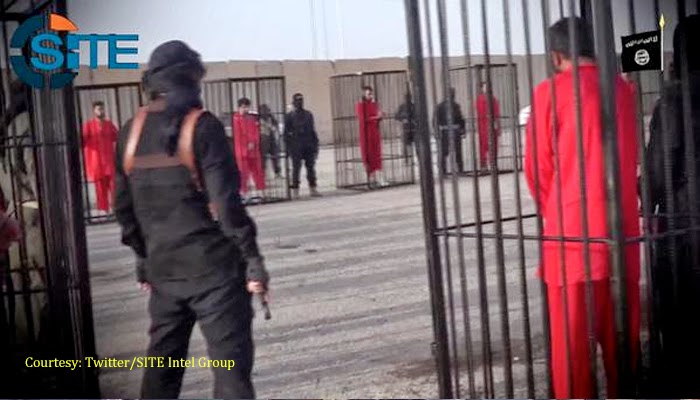 In yet another propaganda video released by the Islamic State, 21 hostages confined in cages are shown being paraded through Iraqi streets, and then being interviewed before being apparently killed.
According to SITE Intel Group, the hostages who were paraded in cages were Kurdish peshmerga fighters, who were paraded through packed streets of Kirkuk province in Iraq.
For a change, the new video does not show any gory scenes, but nonetheless, is meant to sketch a haunting picture of what happens to those who are captured by the ISIS.
The nine-minute video titled 'Healing the Believers' Chests',  shows the Kurdish fighters clad in orange jumpsuits, confined in cages perched atop white coloured cars, with black ISIS flag hoisted atop the vehicles.
However, in an unsual twist, the prisoners were then interviewed by the captors who were bearing microphones with the ISIS symbol on them.
After being interviewed, the prisoners were then dragged out of the cages and made to kneel down.
Like all other ISIS videos, this one too is slickly produced, with camera stopping on the face of each prisoner as information about him is being flashed on the screen.
The video ends with a shot that zooms in on the face of an elderly peshmerga fighter, apparently in his 60s or 70s, before cutting to black, symbolising a dark fate for the captives.
Earlier, the Islamic State had released a video of 21 Egyptian Christians being beheaded by the sea shore, turning waves crimson red.
The latest video only highlights the series of inhumane acts carried out by the ISIS, which is known to have beheaded victims, tortured women using them as sex slaves, and burning people alive in cages.
Posted by pooja