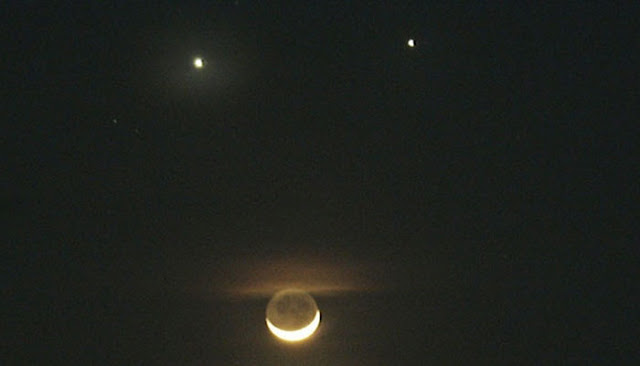 Soon after sunset, shift your eyes towards the sky! You will get to witness the crescent moon given company by Venus and Jupiter making it a celestial extravaganza.

The three celestial objects will be seen in a row as if they are in a divine meeting.
Since these three astronomical bodies, Moon, Venus and Jupiter are the second, third and fourth brightest objects respectively in our solar system after the Sun, you won't find it difficult to locate them shining in the night sky.
Along with the trio, there is a bright star too which will be clearly visible as it makes a line with Venus and Jupiter. The star is Regulus, sometimes called the Heart of the Lion in the constellation Leo.
Venus is the second planet from Sun in our solar system and is located 77 million km from the Earth while Jupiter being the largest planet and fifth from the Sun is located 909 million km from Earth.
Posted by pooja