Gays and Atheists Leave Surprising Comments for the Christian Bakers Who Refused to Make a Gay Wedding Cake and Were Fined $135,000

The crowdfunding campaign in support of the Christian bakers who were fined $135,000 in “compensatory damages for emotional, mental and physical suffering,” after they declined to make a wedding cake for a lesbian couple has brought in more than $352,000, but it’s what some donors are saying in the comments section of the Continue to Give donation platform that is truly surprising.
Among the more than 7,600 people who gave donations and commented in support of Aaron and Melissa Klein, the embattled owners of Sweetcakes by Melissa, were atheists, gays and other unlikely allies who offered kind words and financial support to the couple.
These individuals made the decision to help, despite disagreeing with the Kleins on the gay marriage issue.
“I am a gay man and can’t [believe] that people cannot hold their religious beliefs when conducting business. I think this was a money making scheme by his couple and others in the gay community,” wrote one anonymous donor. “I am ashamed of many who are gay! There are hundreds of thousands of gay men and women who don’t support the gay agenda. We are criticized and shunned if we do not go along with the crowd!” 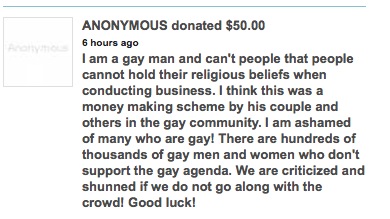 He donated $50, wishing the Kleins “good luck” in their battle against the $135,000 in damages that was imposed by the state of Oregon following the bakers’ 2013 decision to decline making a wedding cake for Rachel Cryer-Bowman and Laurel Bowman-Cryer.

Other messages from seemingly unlikely supporters reflected similar sentiment, with one individual who is married to a transgender woman also expressing support for the Kleins.
“We are a now legally married same sex couple … of course I am ok with the ‘same sex’ marriage if the couple are a real committed couple. Then God will judge not man,” the post read. “But no way force anyone to be involved, and for sure not when violates the others beliefs and faith. My wife and [I] are sincere Christians.” One woman — the mother of two gay sons — said that she believes what’s being done to the Kleins is “wrong,” with yet another individual claiming that it seems “un-American.”

“We believe in same sex marriages, but this is America, and we believe even more that you have a right to conduct your lives and business the way you believe!” the individual wrote. “Giving a speech to customers on your differing beliefs (if you did this) is probably not going to increase your business — but this fine seems anti-American to me.”

One admitted atheist who donated $40.00 to the crowdfunding campaign said that, despite not believing in God and holding differing views from the Kleins, he or she doesn’t agree with the government’s approach to the issue.
“I want you to know that even though I am a firm atheist, I DO believe in all of our 1st amendment rights. And your story and the persecution you are being subjected to really, really, really pisses this non-believer off,” the individual wrote. “I am on your side and I will have your back on this. All the way. And since “god bless” is not my thing, I will say; fight the good fight, and good luck.”
Aaron Klein told TheBlaze on Monday that he and his wife, Melissa, have found these responses to be very encouraging, and while it might surprise some that gays and atheists are coming out in support of the couple, he said that it confirms something he has long known: that Americans can rally around the cause of freedom.
“I was not surprised, and the reason I wasn’t surprised is this is a situation that resonates with Americans,” he said. “If the government can take rights from one person, they can take it from another. … [These people] want to help someone out who is having a problem with it.”
Posted by pooja