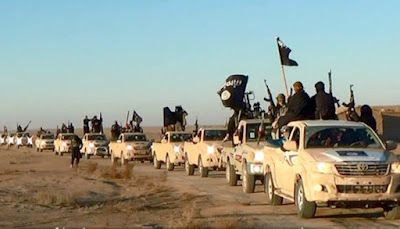 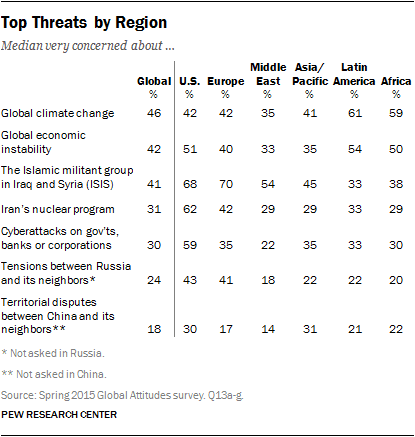 Islamic State is terrorising the United States and European countries more than global climate change, reveals a survey conducted by the Pew Research Center on Tuesday.

In the survey, which was conducted in 40 countries, majority of the population in 19 nations cited climate change as their biggest concern. However, 68 percent respondents in US and 70 percent in Europe cited Islamic State as their top threat.
Trailing Americans and Europeans, Middle Easterners also find ISIS as a major concern for the region and world. 54 percent respondents in Middle East have cited expansion of ISIS as a biggest threat to their existence.
The respondents were asked which one of the given options do they feel is a biggest threat for them. The seven option listed were: Global Climate-change, Global economic instability, ISIS, Iran's nuclear program, cyber-attacks, tensions with Russia and territorial disputes with China.
Unlike Americans, Europeans and Middle Easterns, for Israel it is Iran's nuclear program that poses a bigger threat. 53% Israelis have substantial concerns about the threat posed by Iran’s nuclear program. It was also apparent as soon after Iran N-deal was signed, Israel Prime Minister Benjamin Netanyahu had termed it a 'global mistake'.
It has also been noticed that the issue of cyber-attacks has failed to be a top concern of any of the countries surveyed.
Furthermore, only 18 to 24 percent respondents have cited tensions concerning China and Russia as a threat.
Concern about climate change is relatively low in Europe. While an average of 42% report being very concerned, global climate change is not one of the top two threats in any European country surveyed.
“Anxiety about this issue is highest in Spain (59%), but just 14% in Poland say the same. In a number of European nations, concern about climate change is more pronounced for those on the left of the political spectrum. Ideological differences are particularly large in the United Kingdom, where about half of those on the left (49%) express serious concerns, compared with 30% of those on the right. Those to the left of the political center are also considerably more concerned about global climate change in Italy, France and Spain”, stated Pew.
In India, 73 percent respondents chose global climate-change as biggest threat over global economic instability and territorial disputes with China.
Posted by pooja