Baltimore cop shoots man armed with chapstick and warns his brother: ‘I’ve got a bullet for you, too’ 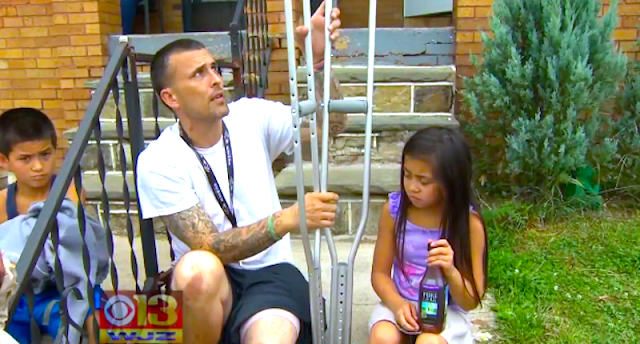 A Baltimore police officer shot and wounded a man after he reached into his pocket to show the chapstick he was carrying.
John Rau was with his brother Monday night when he was stopped by police Major Byron Conaway, although the police department has not said why, reported WJZ-TV.
“All the guy said was, ‘What’s your name, sir?’ and I was like, ‘For what?’ and then he jumped out of the car with his gun and told me to put my hands up,” Rau said. “(The officer asked), ‘What you got in your hand?’ I had a cigarette in one hand, and I just put my hand in my pocket, because I was just putting chapstick on, and I said 10 times, ‘It’s chapstick, only chapstick, officer.”
Witnesses said the officer, who is black, shot the 40-year-old Rau, who is white, in the thigh when he reached into his pocket.
“You see the man walking across the street, the truck pulled right in front of him, pulled past him,” said a witness who did not want to be identified. “He jumped out the car, said, ‘Get on the ground.’ The man kept continuing walking. The police ran around the car with a gun in his hand and shot him. Nothing else was said, just ‘Get on the ground.'”
Ronald Birmingham, Rau’s brother, said Conaway threatened to shoot him, too, when he tried to assist his wounded brother.
“The officer clearly stated to me, ‘I got a bullet for you too,’” Birmingham said. “I said, ‘My brother’s bleeding,’ (but) he said, ‘Back up,’ and he kept pointing the gun and me and pointed the gun at my brother.”
Rau, who was not carrying a weapon, was hospitalized and is expected to recover from his wounds.
“If I wouldn’t have moved, I’d have been Freddie Gray — I’d be dead,” Rau said.
Police said the officer immediately rendered aid and applied a tourniquet, but Rau’s family angrily disputes their claims.
Dianna Warren, Rau’s sister, said Conaway stood over her wounded brother and held him at gunpoint until an ambulance arrived.
“He missed my brother’s artery by so much over that,” Birmingham said, holding up his brother’s chapstick. “There’s no way you can mistake this for a weapon.”
Rau had been on his way to meet Warren’s teenage son to walk the boy home from art class.
“How do you explain that to a 13-year-old?” Warren said. “He’s asking me, ‘If police stop me, should I run?’ I don’t want my child to run, but…”
Conaway, a 16-year veteran, was placed on administrative leave and has 10 days to make a statement to investigators.
The police major received a departmental Bronze Star last year for his actions that resulted in the shooting of a man in 2009, reported the Baltimore Sun.
A woman slipped Conaway a note during that incident pleading for help, and the officer saw a man who had been in a car with the woman reach for a handgun — so he shot him.
The city paid a $67,500 settlement four years ago to another man who claimed that Conaway and other officers beat him unprovoked during a robbery interrogation in 2007, the newspaper reported.
Conaway claims that he pushed that man, Terrell Perkins, to the ground after he reached for his service weapon.
Perkins claims the other officers beat him up when he tried to leave, even though police told him he was not under arrest.
He was charged with assaulting Conaway, although that charge was later dropped, and then acquitted by a jury of resisting arrest.
Watch this video report posted online by WJZ-TV:
Posted by pooja