Bernie Sanders Promises to Get Money Out of Politics; Here’s The Truth 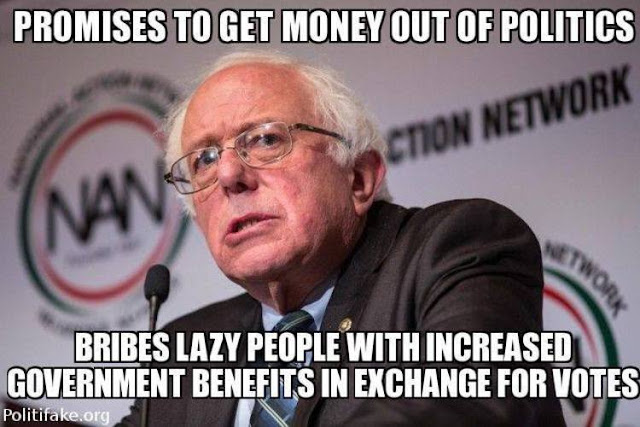 A very wise women once said, “The problem with socialism is that you eventually run out of other people’s money.”
As socialist Vermont Senator Bernie Sanders continues to rise in the polls against Democrat Hillary Clinton, it’s time to start taking a serious look at his policy proposals, their costs and their consequences.
According to an analysis done by the Wall Street Journal, Sanders’ endless government based proposals would cost a whopping (and highly unsustainable) $18 trillion.

In all, he backs at least $18 trillion in new spending over a decade, according to a tally by The Wall Street Journal, a sum that alarms conservatives and gives even many Democrats pause. Mr. Sanders sees the money as going to essential government services at a time of increasing strain on the middle class.
His agenda includes an estimated $15 trillion for a government-run health-care program that covers every American, plus large sums to rebuild roads and bridges, expand Social Security and make tuition free at public colleges.
To pay for it, Mr. Sanders, a Vermont independent running for the Democratic nomination, has so far detailed tax increases that could bring in as much as $6.5 trillion over 10 years, according to his staff.


But what’s the difference between a socialist and a Democrat anyway? Over to you, DNC Chairwoman Debbie Wasserman Schultz.