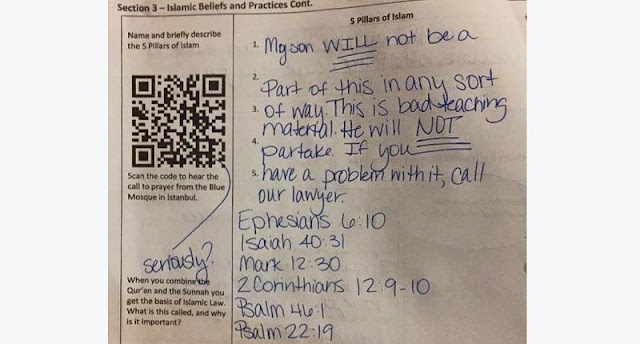 A California mom probably got a response she wasn’t expecting when she posted a photograph of her huffy response to her son’s homework assignment about Islam.
Tara Cali, a Bakersfield mother, scrawled on her son’s homework sheet on the subject of “Islamic beliefs and practices,” and posted a picture of her outburst to the Facebook page of local news station KGET, EAGNews reports.
“My son WILL not be a part of this is any sort of way. This is bad teaching material. He will NOT partake. If you have a problem with it, call our lawyer,” Cali wrote, then listed six Bible verses. Lower, she wrote, “How about Christian practices? That sheet has never come home, this year or last!”
The assignment required seventh graders to list the five pillars of Islam, which include charitable giving, prayer, fasting, faith and holy pilgrimage. The assignment included a bar code that allowed students to listen to the call to prayer at the Blue Mosque in Istanbul, Turkey on YouTube.
Cali didn’t get the support she may have been expecting. She was promptly rebuked of Facebook by people who said what she did was in bad form.
“Let me first say, I’m a Christian, but I feel like you’re taking this a little far. This is [a part] of World History,” wrote Eryn Tyler. “It’s not to force religion upon your child. And this isn’t just ‘here in Bakersfield’. Remember that the teaching method is standardized.”
Melanie Sisco noted she remembered doing a similar assignment 15 years ago and said she had enjoyed the opportunity to learn about people she knew little about.
“I see nothing wrong with the assignment. If you disagree with it as a parent, that is your right. However, you could have handled this in a more mature manner, rather than throwing your son in the middle of this battle,” Sisco wrote. “Instead, you have helped teach your son intolerance–because you don’t believe in a religion that he is learning about in school, you have written scriptures from your own all over it about why these people are wrong and you are right. That is a true shame.”
Rachel German pointed out that “the assignment with an excerpt from the Qur’an is using the excerpt as a piece of literature for analysis, not to proselytize your child.”
“The only thing being ‘forced’ upon your kid is ignorance and intolerance by YOU, the parent, because apparently Christianity is the only belief system a young human being should be allowed be educated on,” Carson Ramirez wrote. “All you are doing is breeding another member of society with an irrational fear of people who aren’t Christian, and therefore embedding the future workings of hatred into your child’s brain.”
Another poster said she was a teacher and thought the assignment was well thought out.
“I am a teacher and completely agree that this should be taught as a part of world history curriculum,” wrote Lesley Harrison. “And that QR code is an awesome, interactive idea. I actually love this assignment. From a personal and religious standpoint, however, I think learning about the foundation of other religions is the BEST thing for young Christian students. Why should we support ignorance? Nowhere on this worksheet does it say “Why is Islam the best religion?” World religions was one of my favorite classes at the private Christian college I attended.”
Watch the call to prayer at the Blue Mosque, as posted to YouTube, here:
Posted by pooja