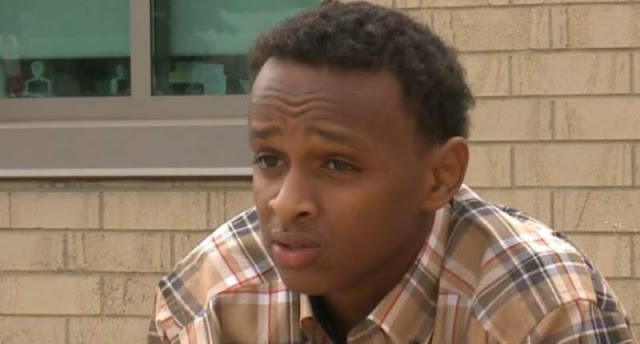 Members of the Somali Human Rights Commission met with police in Richfield, Minnesota on Tuesday after a local officer was caught on video pushing and hitting a 19-year-old man following a traffic stop, KARE-TV reported.
Note: the video posted with this story autoplays.
“He said, ‘Leave my city, and don’t come back for the rest of tonight or I’m going to tow your car,'” Kamal Gelle said of his encounter with the officer last Saturday, which was posted on Twitter.
Gelle told the Minnesota Star-Tribune that when he was initially pulled over near a park, he did not have his license with him and that he was not immediately able to give the officer his insurance information.
At that point, he said, the officer gave him a citation for careless driving and Gelle drove away. A short time later, however, he pulled over to talk to his brother on the phone. The video begins with the officer approaching Gelle and yelling at him, before shoving him and ultimately hitting him on the head.
“He’s a cop,” Gelle said. “He had two dogs in the car barking. He had a gun. With everything that’s been going on with police … I got scared. I thought I was going to be a victim.”
The officer was placed on administrative leave, and Gelle, who is of Somali descent, joined members of the commission for a meeting with Police Chief Mike Koob. Richfield is a suburb of the Minneapolis-St. Paul area, where most of the state’s Somali-American population resides.
Watch KARE’s story, as aired on Tuesday, below.