These 16 States Have Banned Sharia Law – Has YOURS? 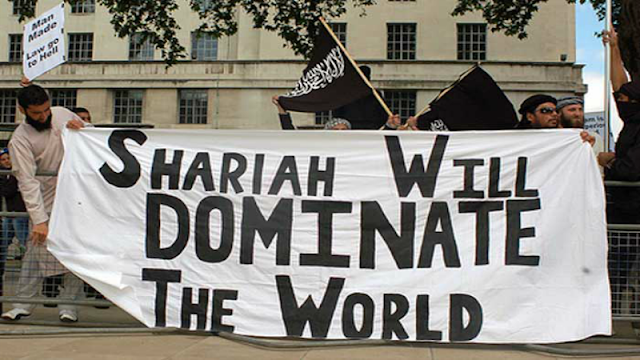 Sharia Law is a direct threat to freedom around the world. To prevent the institution of a law that would run contrary to the Constitution, 16 states have banned Sharia Law.
The rules of Sharia Law violate basic human and civil rights, and are in violation of the United States’ Constitution. As such, many states have taken legal action to ban consulting Sharia in legal cases where Muslims are involved.
Discovering Islam, a pro-Islamic website, describes Sharia in this way:

The punishments under Islamic Sharia laws are not barbaric. They can be severe, but fair.
Prophet Mohammad (s.a.w.) said that if his daughter steals, he would cut off her hand. So, the punishments apply to any one who commits the crimes, even if he is the son of a Muslim ruler.

Furthermore, punishments are usually done in public to be viewed by people so that the viewers can learn a lesson and remember the punishment if they ever consider committing a crime sometime in their life.
Cutting the hands of the thieves mandated in Quran 5:38 is intended as a deterrent measure. This means when people know that the punishment will be so severe, they will not steal. So, you will not end up with cutting off the hands of thousands of people, but rather only very few people will face that severe punishment. That why Saudi Arabia which implements Sharia Laws is very safe.
The punishments under Islamic Law are not intended to punish specific individuals, but rather they are intended to create a society to put an end to crimes or curb the crimes as much as possible.
For some punishments to certain crimes to be applied fairly, the Islamic society must not have conducive conditions and environment for such crimes. That is why the Islamic governments are not supposed to impose punishments if they have conducive conditions for the crimes. For example, Islam mandates paying Zakat ( tax on wealth to be donated to needy people) which helps in eliminating the need for people to steal.

The Council on American-Islamic relations (CAIR) has made several statements in which they have denounced the banning of Sharia, claiming lawmakers are “Islamophobic” and showing “outright hostility toward Muslims.”
It should be noted that while their preferred law is not used in courts, they are still subject to the same benefits afforded to every other American, including the idea of “innocent until proven guilty.”
Below is an alphabetical list of states that have banned the use of Sharia in their courts. Is your state on the list?

If your state was not listed above, make it a point to call your legislators and let your opinions on the matter be heard. There is no place in America for a legal system that runs in violation to our Constitution.
Posted by pooja