Democrat Florida Congresswoman and head of the Democrat National Committee, Debbie Wasserman Schultz, has been known for making idiotic statements before, but she may have outdone herself this weekend.
While the Republicans held a debate in New Hampshire on Saturday night, their eighth debate of the primary season thus far, Schultz seemed to accuse them of trying to hide their debate on a weekend night, according to BizPac Review.
This is actually quite funny, as Schultz and her DNC have been accused of doing the same thing numerous times during this campaign season.
Schultz tweeted, “Hmmm, wondering why @GOP trying to hide their #GOPdebate on the Saturday of#SuperBowl weekend no less?!”

This is simply laughable as nearly all of the five Democrat debates have been scheduled for Saturday or Sunday nights, sometimes during high-profile sporting events, not just during the same weekend as them.

Of course, social media users were quick to point out the delicious irony, blatant hypocrisy and utter lack of self-awareness on the part of Schultz, likely making her regret ever posting the tweet.
Some individuals noted that Schultz was embarrassing herself, while others assumed the tweet came from a parody account, or that the real DWS account had been hacked. Even staunch liberals let her know that she had gone too far. 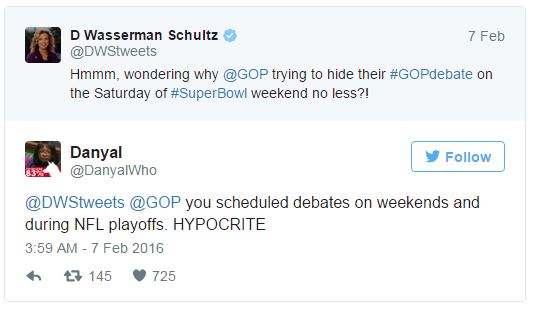 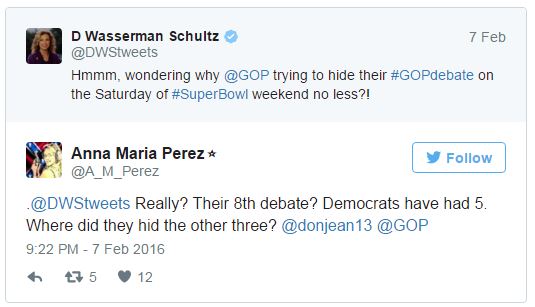 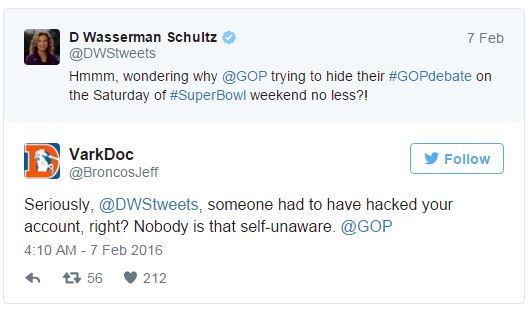 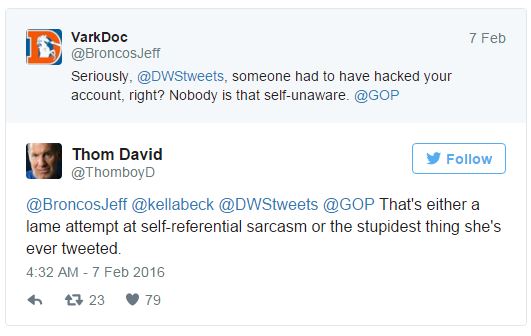 Finally, one user seemingly expressed some concern for Schultz’s mental health and offered her a bit of advice to better serve herself going forward. 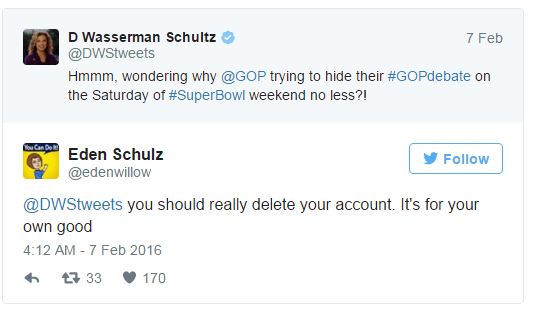 Debbie Wasserman Shultz has gone out of her way to try and insulate Hillary Clinton from challenges and too much exposure to the general voting public, fearing it would hurt her chances at earning the nomination and winning the general election.
It is the height of hypocrisy for her to attempt to mock the Republicans for doing one time something that she has done repeatedly.
Posted by pooja