A group of prostitutes who are calling themselves “Hookers 4 Hillary” are apparently hitting the campaign trail in an effort to try and help Democratic presidential contender Hillary Clinton soar to victory in November.
The prostitutes who comprise the Hookers 4 Hillary cohort work at Moonlite Bunny Ranch near Carson City, Nevada — a legal brothel that is owned by Dennis Hof, the Daily Mail reported.
A website setup to advertise the effort, which was launched after Clinton announced her candidacy last year, proclaims that the women have a “four-point platform” that fully explains their endorsement: protecting health care reform, foreign policy experience, support for agencies that protect public health and prevention of a return to supply side economics.
Watch the Hookers 4 Hillary endorsement video from 2015 below: 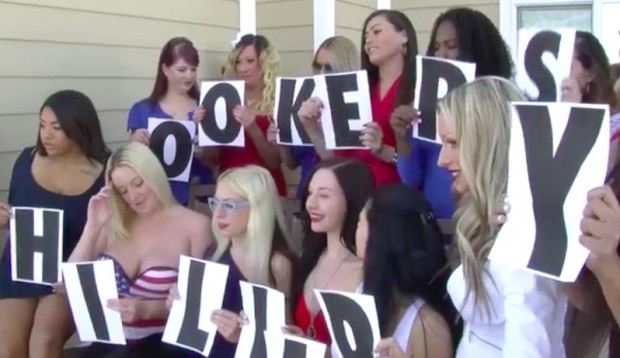 The women say that the Affordable Health Care Act made it possible for the 500 “independent contractors” employed by Hof to gain health coverage — something that they want to see protected.
“With any Republican nominee likely to work for its’ repeal, the Bunnies want to protect the quality health coverage that they now enjoy,” the platform reads.
The Hookers 4 Hillary members are also praising Clinton for her role as secretary of state, claiming that they can “relate” to her ability to work with diverse groups and individuals.
“The Bunnies recognize that thriving economies are built from the bottom up, where the vast majority of their clients originate,” they said. “A return to relying on the disproven theory of trickle-down economics would only serve to exclude the vast majority of hard-working Bunny Ranch clients from having the discretionary income to enjoy with their favorite Bunny.”
As The Guardian noted, the Moonlite Bunny Ranch has taken a sharp turn from its 2008 and 2012 support of libertarian Ron Paul, but many of the sex workers there believe wholeheartedly that Clinton is the best candidate to move America forward.
“I’m for Hillary because she’s cracking down on domestic violence,” 26-year-old Entice Love told the Guardian. “I’ve been in a relationship for a long time where I’d been thrown down stairs, black eyes, fractured ribs … when I’m looking at who I want to pick for the presidency, I look at what are they doing that I can relate to that will be of benefit for me. That’s why I was for Obama, now I’m for Hillary.”