Iran has been forced to take emergency action to protect its main oil terminal and other parts of its energy infrastructure after they came under a fresh wave of cyber-attacks. 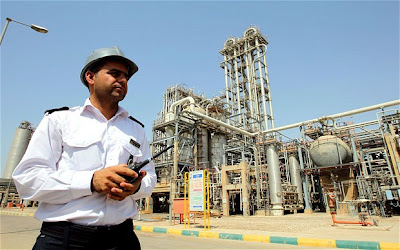 Reports on semi-official news agencies said that the oil terminal, on Kharg island near the neck of the Gulf, the central oil ministry and the main national oil company, as well as other linked companies, had all been targeted by a computer worm on Sunday.

Officials claimed that the attack had not affected oil exports or processing, but admitted that damage had been done. In response, a "crisis team" was set up to counter the attacks, while the systems were disconnected from the internet as a precaution.

There were no initial reports of who might be responsible, and a deputy oil minister quoted by the Mehr news agency said that it had not been determined whether the attack came from inside or outside the country. But Israel has been assumed to be responsible for a number of significant cyber-assaults on Iran's key infrastructure.

Most notably, Stuxnet, a highly complex and sophisticated computer worm that antivirus experts said would almost certainly require the resources of a national cyber-warfare team, infected Iran's nuclear programme in 2010. That was later said to be a joint Israeli, CIA and, according to one report, MI6 operation.

The latest attack destroyed data on the servers of the oil ministry and the National Iranian Oil Company, bringing down their websites the reports on the Mehr website and other news agencies said, though they also added that oil-related computer systems had been deliberately taken off-line to protect them from further attacks.

Hamdollah Mohammad Nejad, the head of the oil ministry's civil defence unit, said a special committee was trying to work out how to prevent further attacks.

The officials insisted that essential data was kept on separate servers and had not been harmed.

The Kharg island terminal, which handles nearly all Iran's oil exports, was said to have continued to operate, though Iran has decreasing numbers of buyers thanks to the worldwide sanctions programme.

On the same day the attack was reported to officials, Maj Gen Benny Gantz, the Israeli military chief of staff, had a cryptic interview published in the country's biggest selling newspaper, Yediot Ahronot, saying he had ordered an escalation in special covert operations around the world.

Iran and its nuclear programme are undoubtedly the prime concern of Israel's foreign policy at present, and its oil industry would be a logical extension if covert activity were to be targeted elsewhere. Western powers are hoping that sanctions will disrupt its economy, particularly the oil exports on which it is dependent, seriously enough to force it to make concessions and stave off a potentially catastrophic war.

: Leon Panetta, the US defence Secretary has cast doubt on Iranian military claims that it started building a copy of a US surveillance drone captured last year.

General Amir Ali Hajizadeh, head of the Revolutionary Guards aerospace division, claimed on Sunday that engineers were in the final stages of decoding data from the Sentinel aircraft, which came down in December near the Afghan border.

"It's obviously a classified programme and I don't want to get into the particulars of that programme," Mr Panetta said

"But I think I can tell you based on my experience that I would seriously question their ability to do what they say they've done."
Posted by pooja