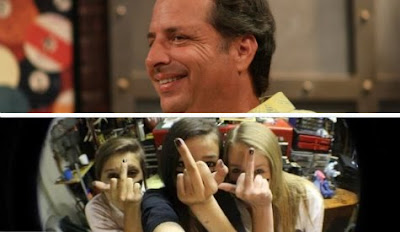 Jon Lovitz, good for you. The 55-year-old comedian has used Twitter to bring down a trio of teenage bullies who left anti-semitic graffiti and feces on the doorstep of their victim.

The three 14-year-olds drew swastikas and wrote the word ‘JEW’ in maple syrup in front of their victim’s house. Feces was left on the doorstep.

Unfortunately for these three skinwasters, their victim was the daughter of Lovitz’s friend. When he heard his pal’s daughter was being picked on, the comic took to Twitter. On April 5, the Jewish star tweeted a picture of the attack, with the text:

“Some coward & idiot left this on a friend’s doorstep, yesterday. This is an insult to all of us.”

Just a few hours later, Lovitz revealed a picture of the three bullies who were responsible (above, and don’t they look like charming young ladies) to his 25,000 Twitter followers, asking for a retweet:

“The 3 girls who are bullying my friend’s daughter. They want to be known. Let them be famous as Jew haters. Pls RT.”

The image spread rapidly, and just a few days later, Lovitz had news:

The three girls who vandalized home with swastikas and dog crap, have been expelled from their school permanently.

Yep, the three teens had been kicked out of their Northridge, Calif middle school for good, and could face ‘hate incident’ charges. A bright future surely awaits them, har.

Mind you, while the girls themselves are plainly misguided and foolish, a special mention should go to the adult mother/piece of human excrement who drove the teens over to the girl’s house in the middle of the night to commit the hate incident. She’s also facing criminal charges now. 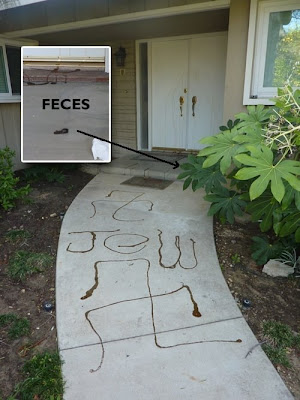