No Good Cops Go Unpunished When They Stop a Beatdown 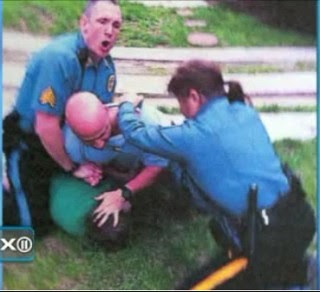 Regina Tasca." She's a Bogota, New Jersey, police officer who responded to a medical call to transport an emotionally disturbed young man to the hospital. As per protocol, she called for backup. Two officers from Ridgefield arrived on the scene, and proceeded to whomp on Kyle, the guy they were supposedly helping.

On the tape you can hear Tara, the mother, and Kyle, her son, screaming, "Why are you punching him?" and "Stop punching me!"

The two Ridgefield Park Sergeants are never heard refuting the claims that they punched the 22 year-old man as he was waiting for an ambulance.

Even worse, Kyle was never charged, nor arrested, for any offense. Tasca says it's because he never threatened, did not have a weapon, and indeed never resisted and was not violent. Eventually Tasca was able to pry the punching Ridgefield Park officer off Kyle, as seen in a picture taken by the Kyle's mother, who also later commended Tasca in a phone call.

You know what comes next, right? Yeah. After physically intervening against two violent colleagues-in-blue, Tasca'a job is at stake. She faces a departmental trial on charges that she's "psychologically unfit" to be a police officer.