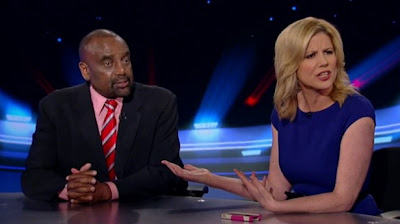 Rev. Jesse Lee Peterson, a tea party activist that’s appeared several times on Fox News, and founder of an organization where Sean Hannity serves as an advisory board member, said in a sermon recently published to YouTube that America’s greatest mistake was allowing women the right to vote, adding that back in “the good old days, men knew that women are crazy and they knew how to deal with them.”

In the video, published to YouTube in March, Peterson explains that he believes women simply can’t handle “anything,” and that in his experience, “You walk up to them with a issue, they freak out right away. They go nuts. They get mad. They get upset, just like that. They have no patience because it’s not in their nature. They don’t have love. They don’t have love.”

Despite his statements being online for more than a month, Hannity welcomed Peterson on his show last Tuesday to castigate the Obama administration over “taking credit” for the Osama bin Laden assassination — but the segment didn’t exactly go as planned.

In his March sermon, Peterson adds that Sandra Fluke, a Georgetown Law student who recently spoke to a House Democratic hearing on contraception coverage, was actually revealing “all the sex” college students are having. “It’s really all about maintaining the freedom to kill babies in the womb,” he says. “Women are now degraded. Women have no shame.”

At roughly 8:30 into his 12-minute sermon, he doubles down, amazingly, saying that he believes America went wrong when it gave women the right to vote.

“I think that one of the greatest mistakes America made was to allow women the opportunity to vote,” Peterson says. “We should’ve never turned this over to women. And these women are voting in the wrong people. They’re voting in people who are evil who agrees with them who’re gonna take us down this pathway of destruction.”

“And this probably was the reason they didn’t allow women to vote when men were men. Because men in the good old days understood the nature of the woman,” he adds. “They were not afraid to deal with it. And they understood that, you let them take over, this is what would happen.”

Peterson, founder of the conservative religious group Brotherhood Organization of A New Destiny (BOND), appeared on the Fox News Channel on May 1, more than a month after giving his controversial sermon. Fox News host Kirsten Powers even confronted Peterson about his “mysogynistic” speech and challenged Hannity to repudiate it, but the Republican opinion host did not, and instead gave Peterson a platform to denounce “liberal, women policies.”

That may not be a surprise, however: Hannity has hosted Peterson numerous times and even serves on BOND’s advisory board. “BOND continues to fight the good fight standing for the values of God, family, and country, and are deserving of our support,” he said, according to the group.

Speaking to Peterson on May 1, Powers protested his appearance on Hannity’s show, explaining that she was “hijacking” it because “I didn’t know I was going to be on with him.” She then accused him of “using God’s word to teach misogyny.”

“I don’t know if you noticed or not, but the liberal Democrat womens are calling themselves whores,” Peterson replied. “They came out with their so called group of women who are within the Democrat party, and they are admitting that they’re whores and they are saying that they are proud of it. I’m okay with that, I just don’t want to pay for it.”

That “truth,” it would seem, isn’t just about liberal women, or even women in general. Peterson made headlines in January after telling a Huffington Post reporter that he would like to see black people put “back on the plantation so they would understand the ethic of working… They need a good hard education on what it is to work.” On his website, Peterson has published an open letter to Attorney General Eric Holder that advocates the arrest of New Black Panthers members.

In another post, he explains what he calls “the end of one-sided defense,” in which Peterson insists that men should re-take the right to physically strike women. “While I certainly do not sanction men attacking women, neither is it right for men to allow themselves to be beaten by a woman,” he wrote. “It’s time for men to re-assert their right to self defense.”

Peterson has also been on the leading edge of racially-motivated Republican attacks on Planned Parenthood, alleging at a press conference in 2008 that the group is responsible for killing “over 1,500 black babies” every day.

Neither Peterson nor a Fox News spokesperson responded to requests for comment.