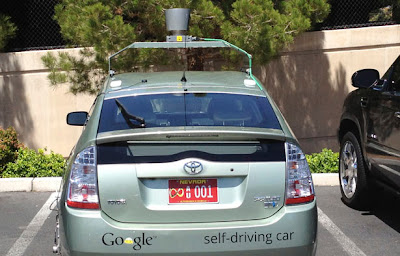 Ever since Google began designing its self-driving cars, they've wanted to build cars that go beyond the capabilities of human-piloted vehicles, cars that are much, much safer. When Sebastian Thrun announced the project in 2010, he wrote, "According to the World Health Organization, more than 1.2 million lives are lost every year in road traffic accidents. We believe our technology has the potential to cut that number, perhaps by as much as half."

New data indicate that Google's on the right path. Earlier this week the company announced that the self-driving cars have now logged some 300,000 miles and "there hasn't been a single accident under computer control." (The New York Times did note in a 2010 article that a self-driving car was rear-ended while stopped at a traffic light, so Google must not be counting the incidents that were the fault of flawed humans.)

For comparison, in the United States in 2009 there were 10.8 million traffic collisions, according to the Census Bureau. That same year, American cars logged some 2.954 trillion miles, for a collision rate of about .365 per 100,000 vehicle miles traveled. Now, you can't directly compare the two figures. Google's cars have been tested in pretty hospitable conditions, not facing, for example, the rigors of a New England winter. And, as Google engineer Chris Urmson, writes, they still "need to master snow-covered roadways, interpret temporary construction signals and handle other tricky situations that many drivers encounter." Additionally, the cars are still driving with "occasional" human control. But at the very least, the Google cars are slowly building a pretty good-looking driving record.

This technology is still at its very early stages and 300,000 miles is not all that big of a sample. According to a "cursory" analysis by Bryant Walker Smith of Stanford Law School, "Google's cars would need to drive themselves (by themselves) more than 725,000 representative miles without incident for us to say with 99 percent confidence that they crash less frequently than conventional cars. If we look only at fatal crashes, this minimum skyrockets to 300 million miles." We're still a long way away from there.

Legally -- and ethically -- we will need to grapple with the questions about safety standards for autonomous machines. As Smith said to me over email, "How well must these vehicles ultimately perform? Perfectly? Or something less -- an average human driver, a perfect human driver, or a computer with human oversight? And how should this be measured?" And, perhaps toughest of all, how will we make those decisions, and, really, who will make them?