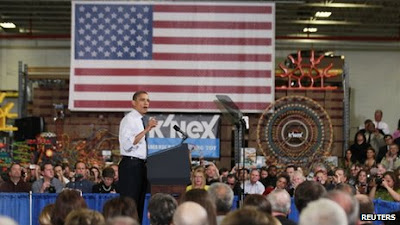 Last week, Barack Obama visited a toy manufacturer in Pennsylvania to talk about his plan

US President Barack Obama is to address Michigan car workers to build support for his plan to raise taxes on the rich and avert a looming "fiscal cliff".

Deep spending cuts and tax rises due to take effect on 1 January threaten to derail US economic recovery.

Extended benefits for the long-term unemployed and a temporary cut to payroll taxes are also scheduled to expire at the same time.

International observers, such as Christine Lagarde, head of the International Monetary Fund, have warned that there would be ripple effects for the rest of the world if US lawmakers are not able to agree to a deal.
'Shifting focus'

Mr Obama's appearance at a car factory outside Detroit is his latest public outreach effort in recent weeks to sell a plan that would increase taxes for the rich while extending Bush-era tax cuts for everyone else.

The president's plan calls for $1.6tn (£990bn) in new tax revenue over 10 years.
Mr Boehner, the top Republican in Congress, has said that he is prepared to consider increasing tax revenue - by closing loopholes and limiting deductions rather than raising rates.

Neither side revealed details about the meeting between Mr Boehner and Mr Obama on Sunday, but representatives released identical statements saying "the lines of communication remain open".

Although Republicans are philosophically opposed to raising taxes, some congressmen have recently suggested they would consider agreeing to Mr Obama's demand.

Republican Senator Bob Corker told Fox News on Sunday: "There is a growing group of folks looking at this and realising that we don't have a lot of cards as it relates to the tax issue before year end."

He added that if Republicans accepted the higher top tax rate, "the focus then shifts to entitlements, and maybe it puts us in a place where we actually can do something that really saves the nation".

The Republican counter-offer would aim to collect $800bn in revenue by closing tax loopholes and deductions.
It would also reduce government spending by $1.4tn by raising the age of eligibility for Medicare, a popular healthcare programme for the elderly, and by changing the way annual increases in Social Security payments are calculated.

So far, Democrats have appeared reluctant to discuss reforms to major entitlement programmes.

Senate Democratic Whip Dick Durbin told NBC News on Sunday: "We need to address that in a thoughtful way through the committee structure after the first of the year."

The White House has repeatedly said it would not support any deal that did not increase tax rates on the wealthiest.

If a deal cannot be reached, economists say the fiscal cliff would suck about $600bn out of the economy.

The measures were partly put in place within a 2011 deal to curb the yawning US budget deficit.
Posted by pooja