Sever links with Taiwan to improve ties: China to Vatican 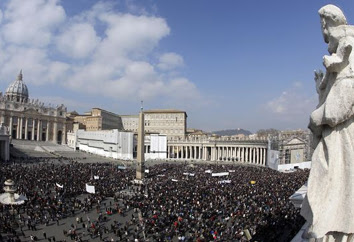 Setting stiff conditions for improving ties with the Vatican, China on Monday said the new pope should sever links with Taiwan and stop interfering in its internal affairs in the name of religion.

Asked for China's expectation from the next pontiff after Pope Benedict last week said he would quit, a Chinese Foreign Ministry spokesman said the Vatican should "sever diplomatic ties with Taiwan and recognise People's Republic of China as solely representing whole of China and Taiwan as an inalienable part of Chinese territory".


The Vatican should not interfere in China's internal affairs including interference in the name of religion, spokesman Hong Lei told a media briefing here today.

China hopes the Vatican will show flexibility and sincerity in creating conditions for the improvement of China-Vatican ties under the new pope, he said.

Christianity is regarded as the fast growing religion next to Buddhism in communist China.
According to official figures, China has over 25 million practicing Christians who practice their religion under a tightly controlled regime governed by the ruling Chinese Communist Party.

The Chinese government and the Vatican periodically exchanged hostile statements over China's assertions to have a say in the appointment of Church officials.

Early this month, the Communist Party said it will adhere to policy of respecting religious freedom but prevent "infiltration of overseas-based hostile forces" that make use of religion to subvert its rule.

Yu Zhengsheng, a Standing Committee member of the Political Bureau of the Party's Central Committee, said the Party will adhere to its basic policy of respecting religious freedom.

"Only by implementing the policy can China withstand the infiltration of overseas-based hostile forces that make use of religion," state-run Xinhua news agency quoted him as saying during a meeting with leaders of major national religious groups in Beijing.
Posted by pooja