Hop it! You could be a criminal: What police told girl, 10, who chalked hopscotch grid on the pavement outside her home 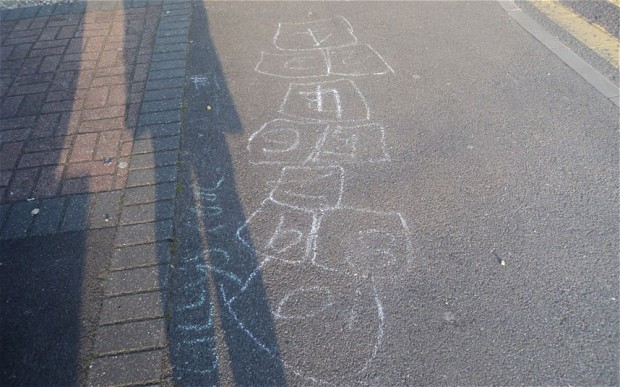 Officers reportedly reprimanded Lilly Allen, 10, earlier this week, saying the traditional game’s outline she drew on the pavement was akin to criminal damage.
The schoolgirl was said to have been given the warning by two unnamed officers as she played the centuries-old skipping outside her home in Ramsgate, Kent, the Sun reported.
She was issued the warning after making the outlines in white chalk, which washes away in rain.
Her father, Robert Allen, 51, was left angered by the suggestions and has since lodged a formal complaint to Kent Police over the incident, which occurred on Monday.
After posting a picture of the grid on his Facebook page, the pub entertainer joked: “I call her Banksy now.”
Scores of his friends commented on the posting, labelling the police comments as “ridiculous”.
Jeanette Elliott wrote: “It's crazy it's what we all did as kids the worlds gone mad!”
Vernon Vandell added: “Poor copper.....how many weeks basic training do they have to do before they are 'qualified'? He'll be nicking the toddlers for leaving tricycles unattende [sic] next!”
It is understood that police were today “trying to establish” which officers may have spoken to the girl.
“We cannot currently trace any car being in the area at the time,” one source told The Daily Telegraph.
Mr Allen, who is known as Bob, was unavailable for comment today. But he told the tabloid newspaper: “Two policemen in a car drove up to her and said it was illegal to draw on the floor as it was criminal damage.
"I am absolutely seething they have done this."
A Kent Police spokesman said in a statement: "We are trying to trace the officers, who are reported to have made this comment.
"From the circumstances described, it would not appear to have been necessary to advise the young girl that chalking a hopscotch grid may be criminal damage and illegal."
Hopscotch, which children hop from box to box in a set pattern, has been played for centuries and is so popular many schools and playgrounds have grids inbuilt.
Posted by pooja