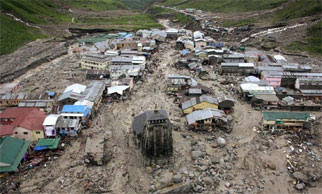 The famous Kedarnath shrine was virtually submerged in mud and slush where 50 people died in the unprecedented flash floods that claimed over 130 lives in Uttarkhand and Himachal Pradesh and left over 70,000 pilgrims for Himalayan shrines stranded.

The shrine, one of the four holy dhams, in Rudraprayag district of Uttarakhand bore the brunt of torrential rains. About 500 people, including several pilgrims, are said to be missing in the area.

Kukhimath Sub Divisional Magistrate Rakesh Tewari told reporters after his return from Kedarnarth that 50 bodies are lying in areas adjacent to the shine.

"We are right now concentrating on rescuing those who are alive," he said. The death toll may rise significantly once water recedes and relief teams are able to access the affected areas.

A portion of the Kedarnath temple compound was washed away but authorities said no damages were reported to the structure itself.

The Ram Bada area, a busy spot near the temple, has been completely submerged and was not visible from rescue choppers.

Army Central Command officials said that nearly 6,000 to 8,000 people are stranded in Kedarnath, 2,500 in Hemkund Sahib and around 8,000 in Badrinath.

Flash floods, cloudbursts and landslips have so far claimed 131 lives in northern India. Thousands have been displaced in Uttar Pradesh where several rivers are in spate.
The death toll in Uttarakhand has reached 102. Rudraprayag district was the worst hit with 20 people dead and 73 buildings, including 40 hotels, along the banks of the Alaknanda swept away in the swirling waters of the river.

A total of 71,440 pilgrims bound for the Himalayan shrines of Kedarnath, Badrinath, Gangotri and Yamunotri are stranded in Rudraprayag, Chamoli and Uttarkashi districts of Uttarakhand with the famous char dham yatra having been suspended due to massive landslides and damage to the road network.

While 27,040 tourists are stranded in Chamoli, Rudraprayag and Uttarkashi have 25,000 and 9,850 pilgrims from various parts of the country stranded, Disaster Management authorities said.

Meanwhile, with a slight let up in the rain today, rescue efforts are being intensified in the affected areas.

More than a dozen helicopters have been deployed in Uttarakhand and Himachal Pradesh for relief and rescue operations with officials saying that all the stranded people are expected to be evacuated soon.

"We have provided seven helicopters to Uttarakhand. The state government has also hired four private helicopters. We are providing helicopters to Himachal Pradesh. Hopefully, all stranded people will be evacuated today," Singh said in New Delhi.

Himachal Chief Minister Virbhadra Singh, who was stranded in Kinnaur district for nearly 60 hours due to landslides, was evacuated this morning by a chopper hired by his Congress party.

The threat of flood, meanwhile, loomed large over Delhi as the water level in Yamuna climbed well above the danger mark. Around 1,500 people in the various low-lying areas of east Delhi have been evacuated and sent to relief camps.

"The water level of Yamuna crossed the danger mark of 204.83-m at 7 AM and reached 205.58-m at 7 PM," an official in the flood and irrigation department said. A high alert has been issued in Uttar Pradesh following heavy rainfall across the state and the release of water by several barrages since yesterday.

Four persons were killed in rain-related incidents in the state, including three teenagers who were struck by lightning in Maharajganj. Another woman was killed and six others injured when a house collapsed in heavy rains in Muzaffarnagar.

Meanwhile, BJP leader Sushma Swaraj tweeted today - "Ajay Bhatt, Leader of Opposition, Uttarakhand has told me on phone that entire Kedarghati has been washed away."
Posted by pooja