Martyrs need not stoke up hatred

The ultimate sacrifice for one's faith is about 'total love' 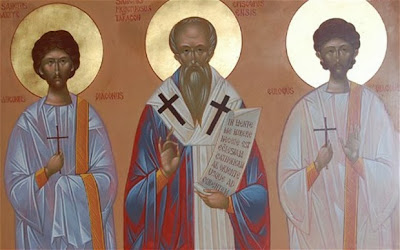 Fructuosus and two deacons, Augurius and Eulogius (pictured in an icon, flanking the bishop), were the first martyrs of Tarragona in Spain, burnt at the stake in AD 259

Tarragona in Spain the ancient Roman amphitheatre stands silhouetted against the Mediterranean, and white wavelets hiss on to the sand.

A little church, dating from Visigothic days, stood in the arena until 1915, when it collapsed from neglect. The church had been built to house the relics of the local bishop Fructuosus. He and two deacons, Augurius and Eulogius (pictured here in an icon, flanking the bishop), were the first martyrs of the city, burnt at the stake in AD 259.

The Acta recounting their martyrdom are the earliest from Hispania that survive. An apparently verbatim extract from court records includes this exchange between Aemilianus, the procurator, and the prisoner.

Aemilianus: Are you the bishop?

The bitter joke typifies relations between rulers and their victims in any era.

Prudentius, who in the next century wrote a Latin poem on the martyrdom, picked from the contemporary account a detail of the Christians present pouring wine on the saints’ remains to cool them among the embers so that they could rescue them as relics.

Remembering martyrs did not entail resentment of the rule of the Romans, whose walls and nearby aqueduct ornament the agreeable little city of Tarragona. There, last Sunday, 522 martyrs from the 20th century were declared blessed, among them a bishop and 147 clergy from the city.

These were all killed in the Spanish Civil War, when many terrible things happened. These priests and friars could hardly be seen as fair game. They were non-combatants and only the most dogmatic Marxists would regard them as class enemies deserving death.

Among those beatified on Sunday were 24 brothers of the order of St John of God. This remarkable man had begun looking after the sick and poor in Granada in 1539, and that was the task of his followers 400 years later. One of those was Feliciano Martínez, who worked at a hospital in Valencia and was know for his big-heartedness and simplicity. He had fallen off a horse once, which left him with a limp, and he gained the nickname Cojito, “Hopalong”. On October 4 1936 he was taken to the shore and shot. He was 73.

Of those beatified, 74 were Brothers of Christian Schools, as they are known in Spain for their provision of education for the poor. In Britain they are called De la Salle Brothers, after their French founder (1651-1719).

Someone who had benefited from the education they offered was Modesto Pamplona, born in Berga, Catalonia, in 1907. He decided to devote his life to the same teaching vocation, and underwent religious training, until, under the Republic, he was obliged to do his military service, which he completed in 1934. In July 1936 he was arrested and imprisoned in the ship Rio Segre. On August 28 he was taken from the ship, and someone asked him if he was to be set free, since he looked so cheerful. “Why shouldn’t I look happy,” he replied, “when I’ll be in heaven so soon?” He and his companions were killed by firing squad. He was 29.

There is no point multiplying examples, but there should be mention of the 27 Daughters of Charity (of St Vincent de Paul) expelled from their convents and killed wherever they were discovered, in Madrid, Valencia or Barcelona.

The beatification is nothing to do with refighting the Civil War. As with Fructuosus, the martyrs’ prayers to God are sought and their example prized. Some groups had demanded the Pope should stop the beatification as giving succour to the Francoist cause. But in a video message for the event, Pope Francis, who knows about civil strife from his years in Argentina, spoke of these martyrs’ “total love”. “When one loves,” he said, “one loves until the end.”
Posted by pooja