Today, we celebrate Martin Luther King Day. We celebrate the legacy of the thousands of people who stood up and spoke out against injustice. These images tell their story.

Police lead a group of black school children to jail after their arrest for protesting in Birmingham, Alabama. [1963] 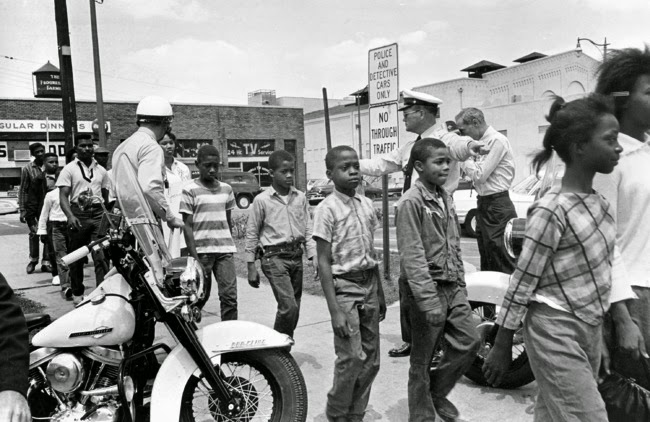 The Birmingham campaign was organised to bring about integration in a city that that had the highest level of segregation in the country. Hundreds of children were arrested for protesting.

Martin Luther King Jr. and Ralph Abernathy are arrested for leading the protests in Birmingham, Alabama. [1963] 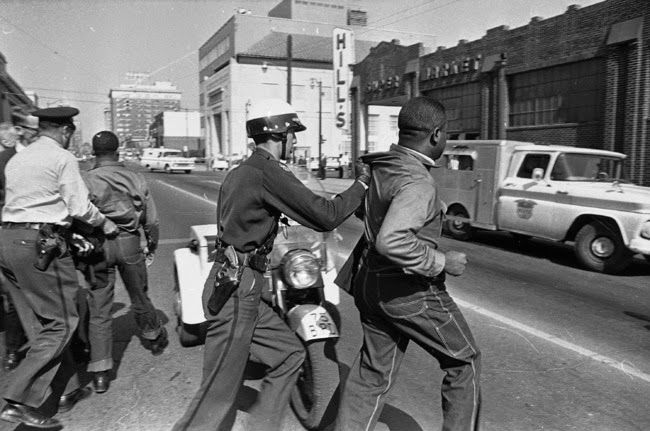 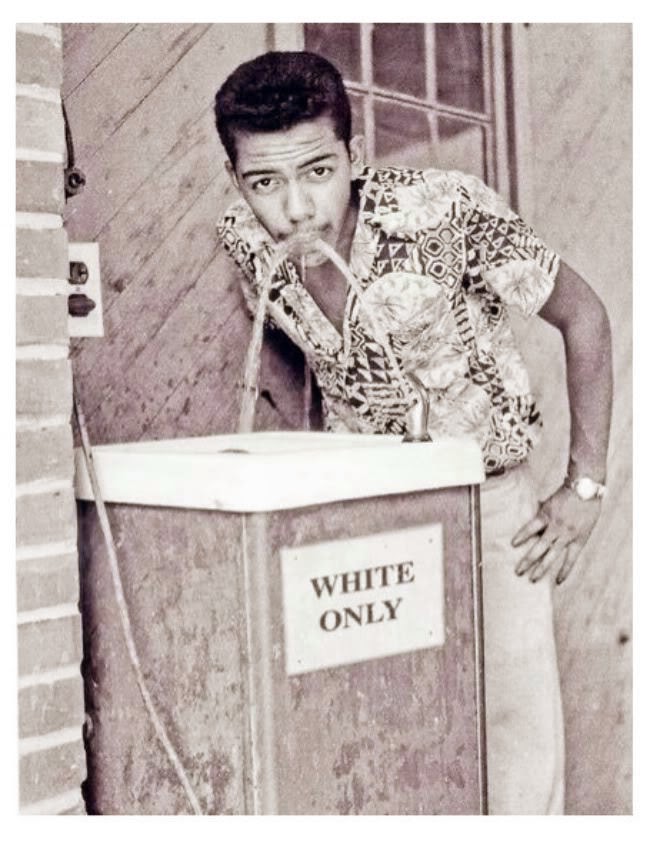 This picture of Mr. Williams now hangs over the water fountain on the Garden level of the Richland Library in Columbia, South Carolina.

Rosa Parks has her fingerprints and mugshot taken after refusing to move from her seat on a bus for a white passenger. [1956] 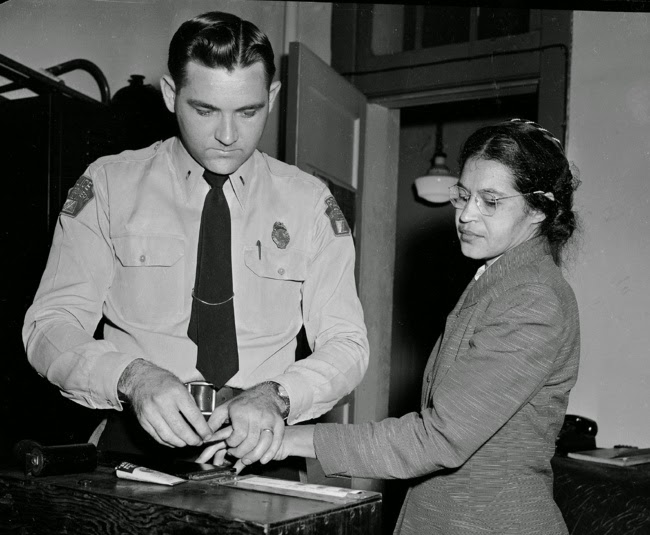 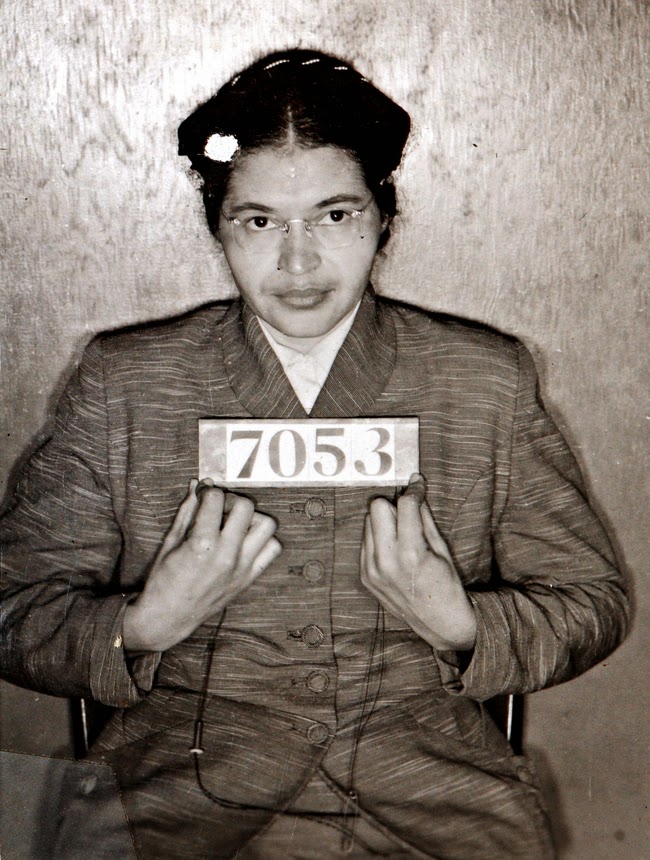 Rosa Parks made history when she violated Alabama segregation laws. Her arrest was followed by boycotts of segregated buses that forced many bus companies to desegregate.

Martin Luther King Jr. removes a burnt cross from his garden with his son at his side. [1960] 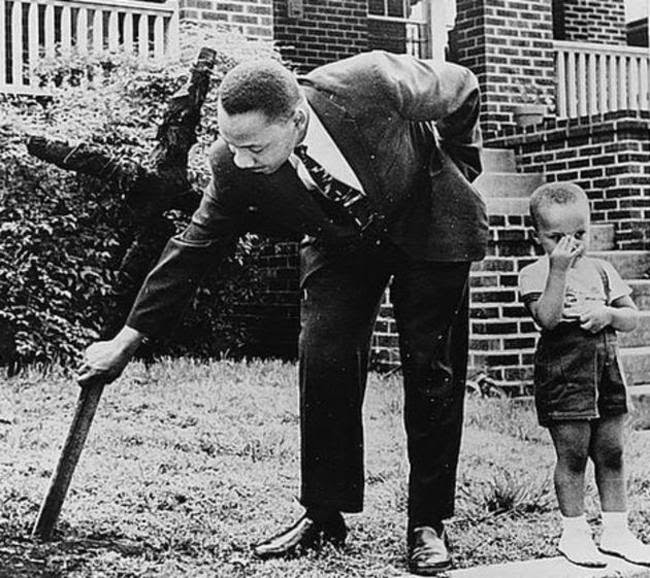 Harriet Richardson, a student organizer at Pennsylvania's Juniata College, presses a cloth to the wounds of Galway Kinnell, the Poet-In-Residence at Juiata during the civil rights march at Selma. [Charles Moore, 1965] 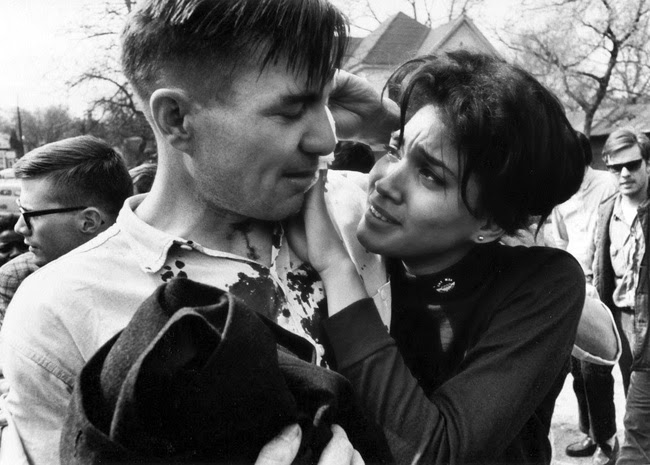 Martin Luther King Jr. leads a group on The Great Freedom March from Selma to Montgomery. [1965] 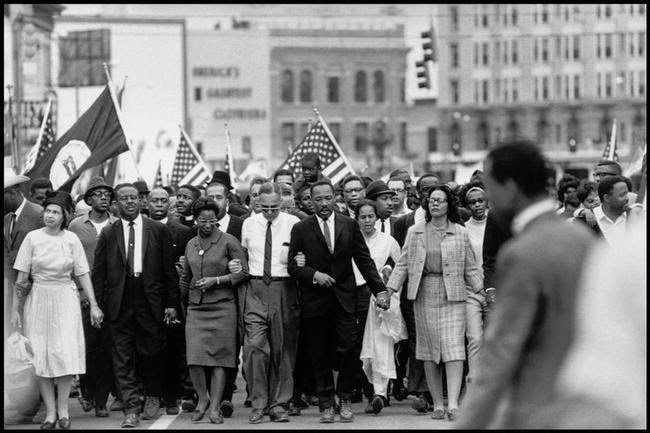 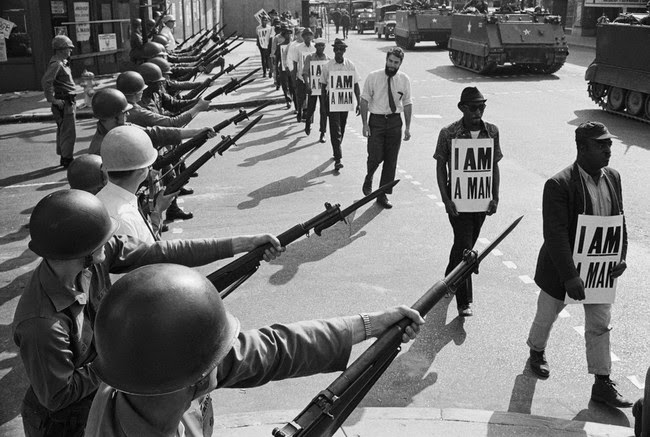 Six-year-old Ruby Bridges, the first black child to attend an all-white school in the south, is guarded by US marshals after threats were made against her life. [1960] 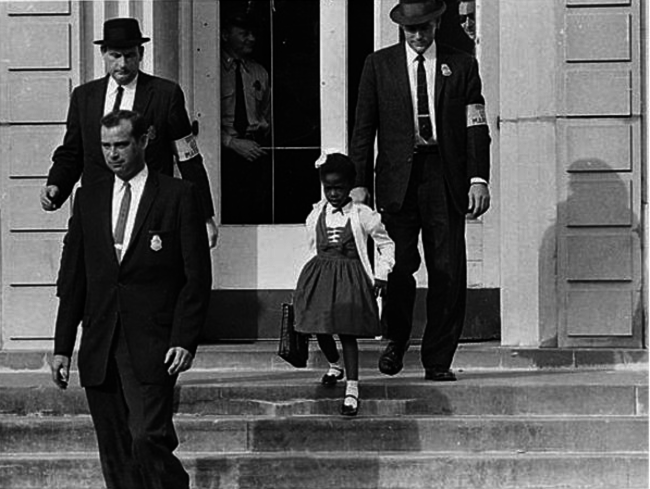 A black girl planning to take part in a sit-in is trained not to react to having smoke blown in her face. [Eve Arnold, 1960] 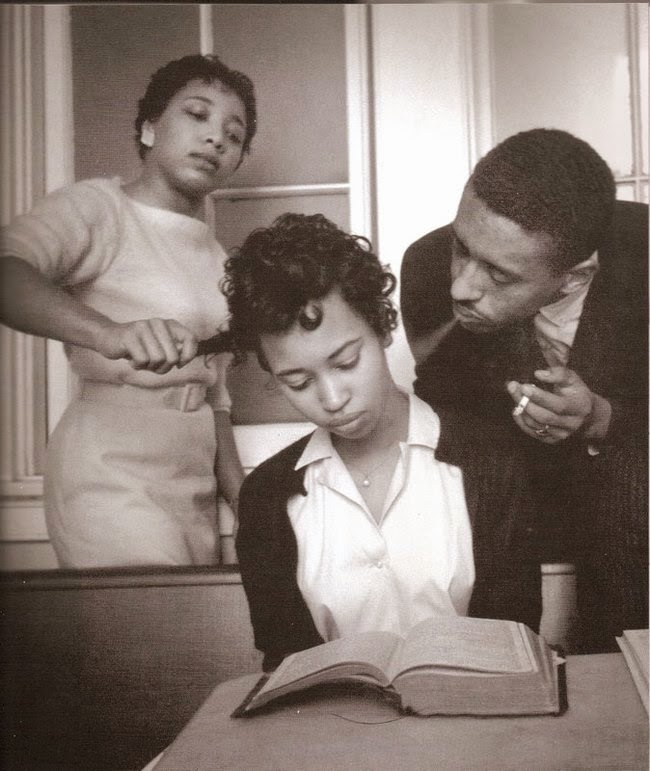 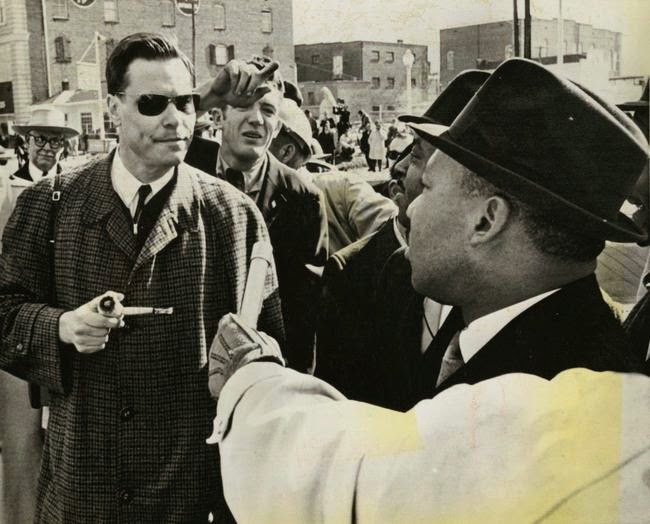 A Freedom Rider bus goes up in flames after a fire bomb was tossed through a window. [1961] 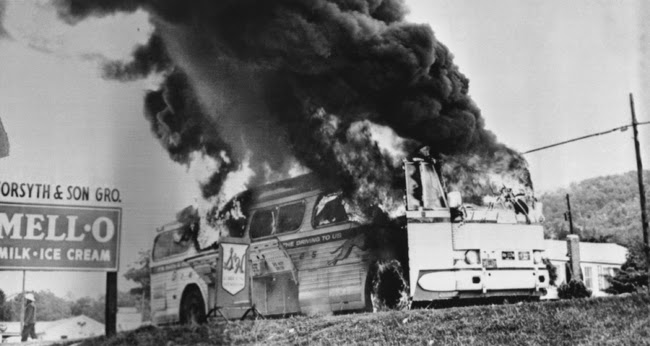 The Freedom Riders were a group that rode interstate mixed race buses from integrated into segregated southern states. 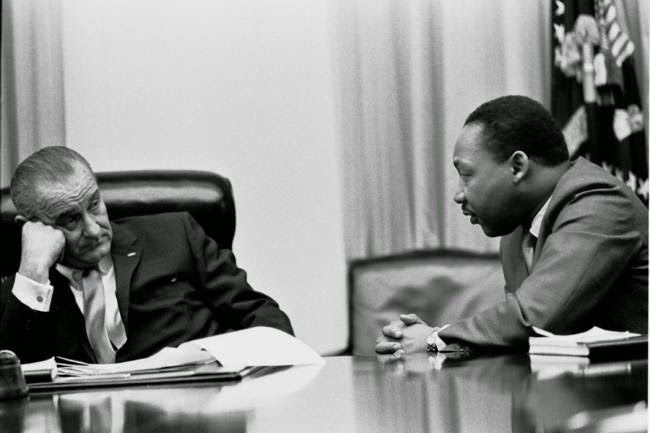 The Voting Rights Act was monumental in that it prohibits racial discrimination in voting. Previously, 'black votes' were worth less than 'white votes.'

The manager of the Monson Motor Lodge pours acid into the swimming pool after protesters jumped in. [1964] 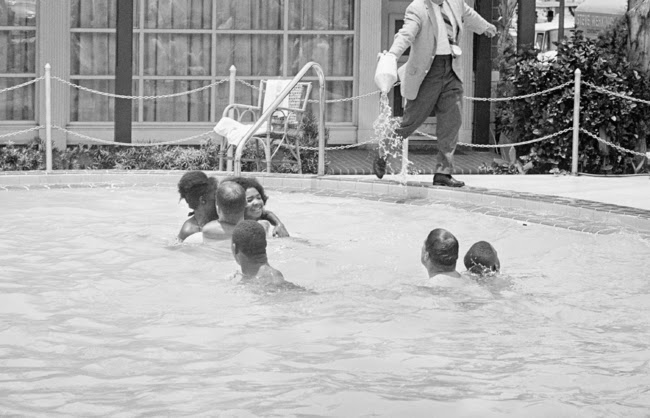 Civil rights demonstrators jumped into a segregated pool at the hotel because the manager refused to let Dr. Martin Luther King Jr. and his guests enter the restaurant. The swimmers were arrested for disorderly conduct.

A volunteer teaches an illiterate woman to vote. [Eve Arnold, 1960] 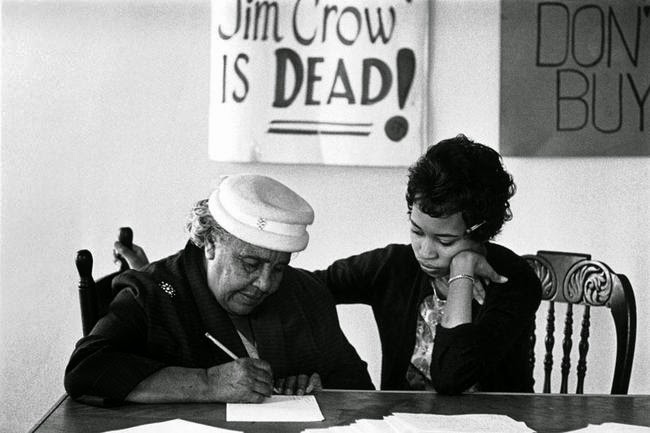 Martin Luther King Jr and many other African Americans supported John Kennedy during the 1960 election because of his promise to increase their rights. The black vote swung many major states and won Kennedy the election.

A civil rights sit-in at the whites-only Cherrydale Drug Fair in Arlington. [1960] 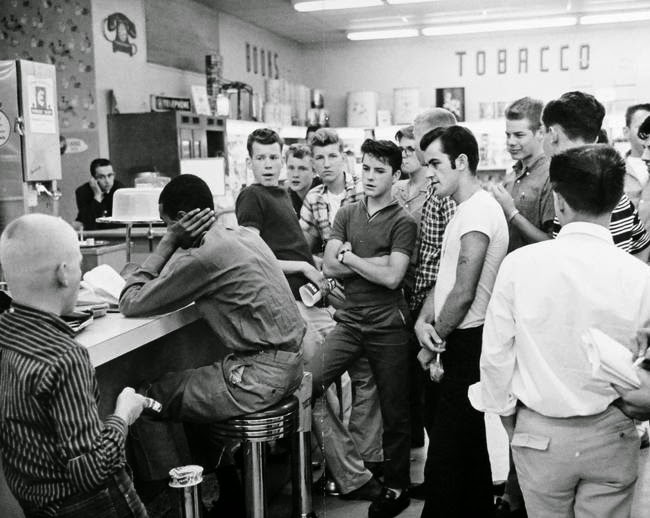 The Greensboro sit-ins were a non-violent form of protest that saw many private businesses change their policies on racial segregation.

A demonstrator stares down a man donning the Confederate flag on his hard-hat. [Bob Adelman, 1960s] 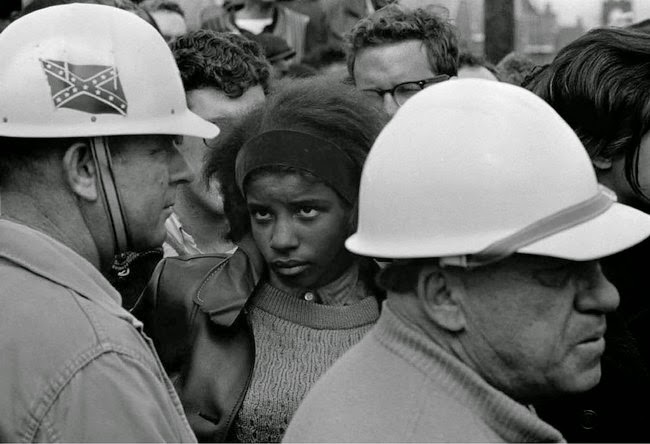 The view from inside the Lincoln Memorial during Martin Luther King Jrs. "I have a dream" speech. [1963] 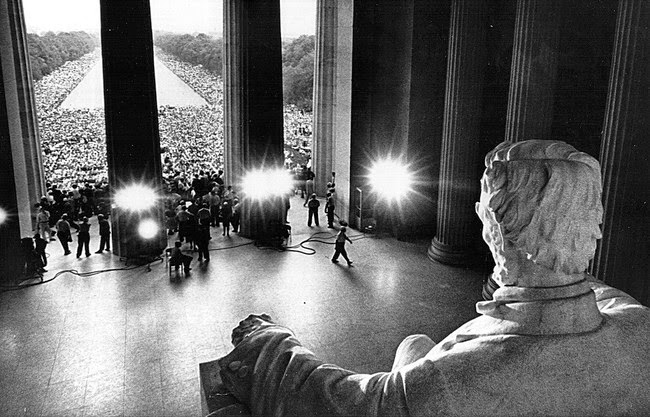 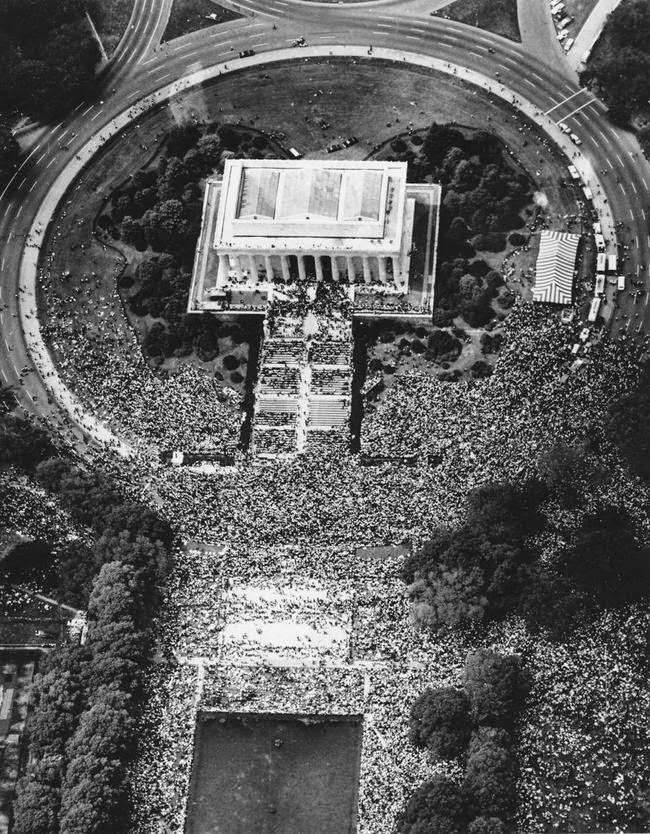 A man uses the American flag to assault a civil rights activist during the Boston Busing Crisis. [Stanley Forman, 1976] 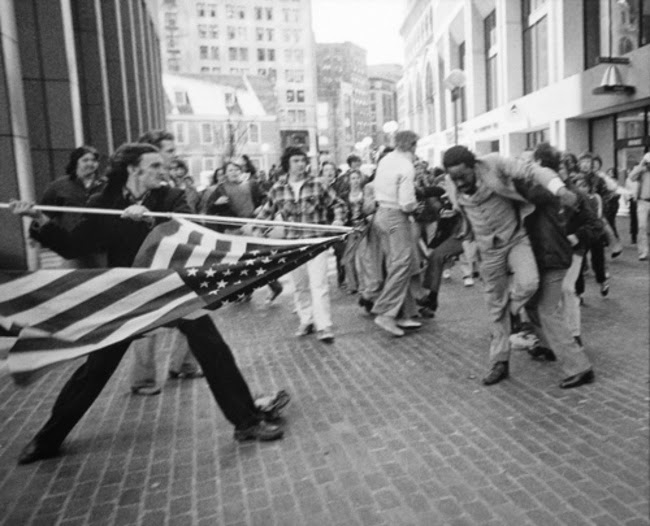 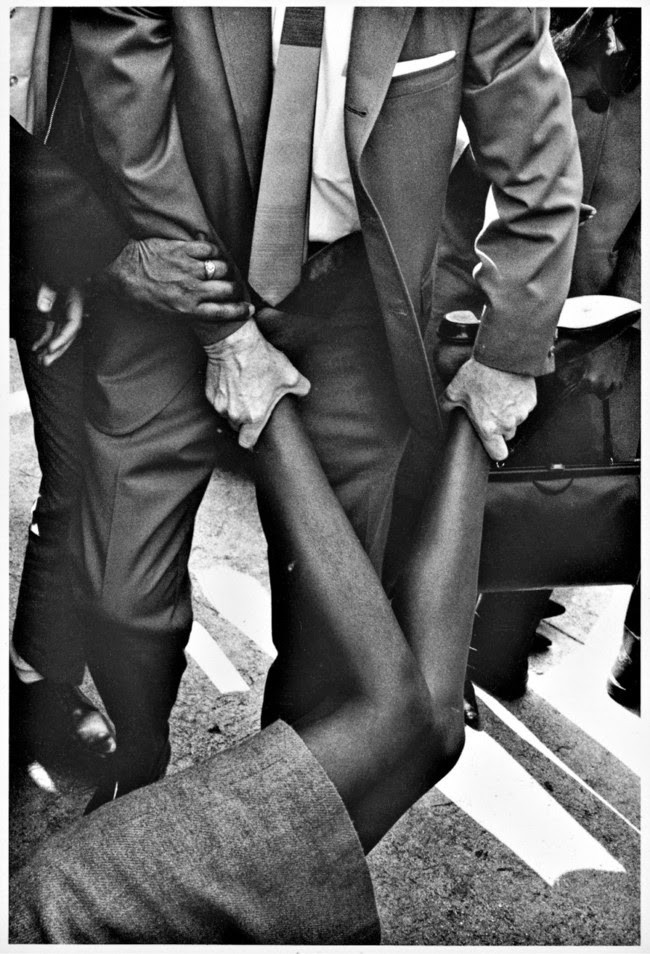 Civil rights protesters are hosed by the Birmingham Fire Department. [1963] 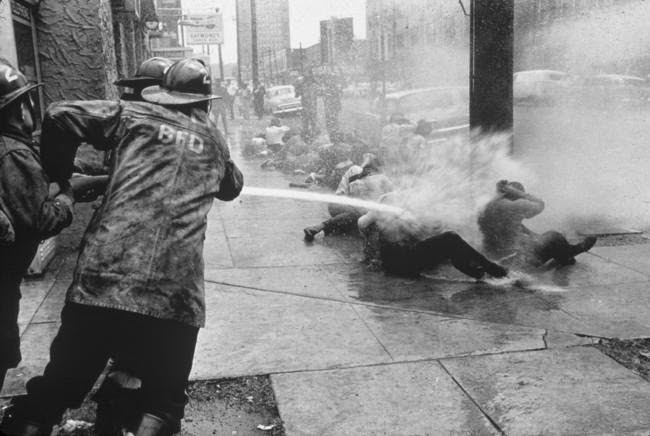 Protesters are covered in ketchup, sugar and mustard during a sit-in at the Jackson, Mississippi, Woolworth's store. 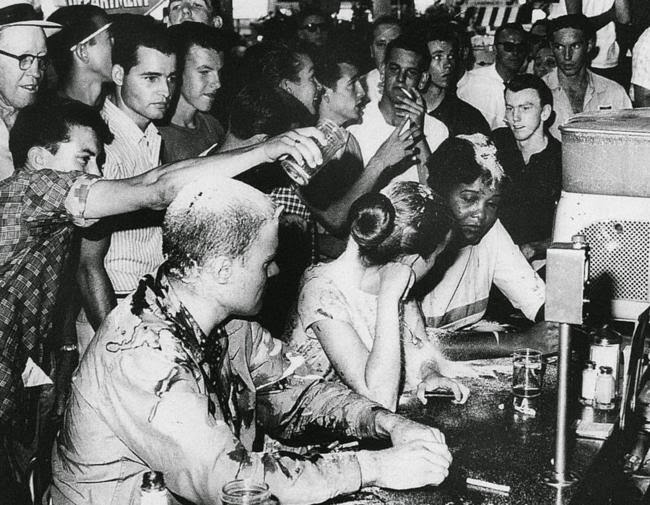 Thousands turn out for the funeral procession of Martin Luther King Jr. following his assassination. [1968] 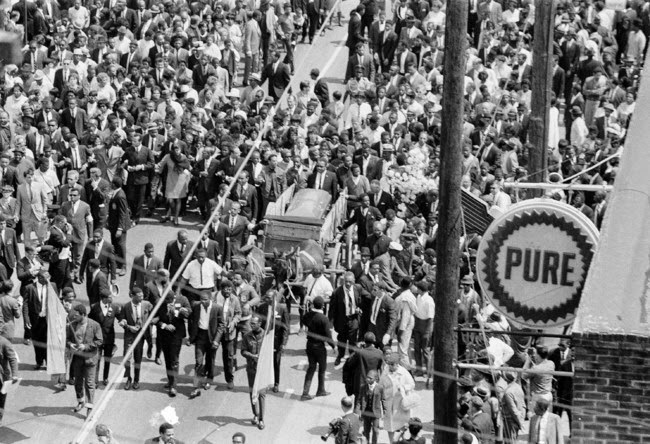 Trading on Wall Street halted for a minute at 11 am in tribute to the civil rights leader. [1968] 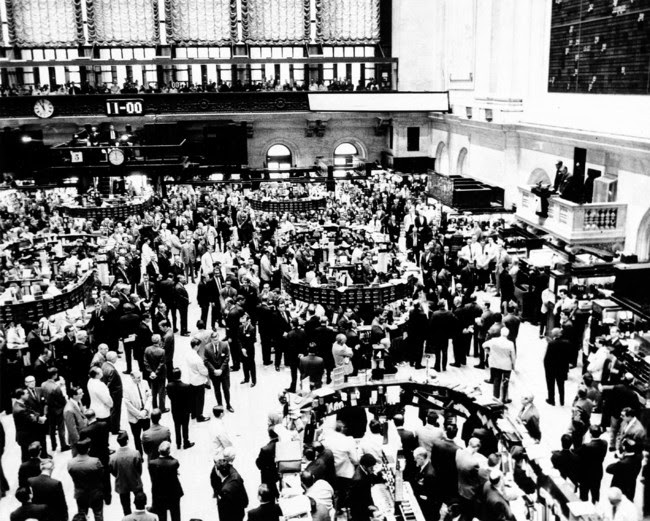 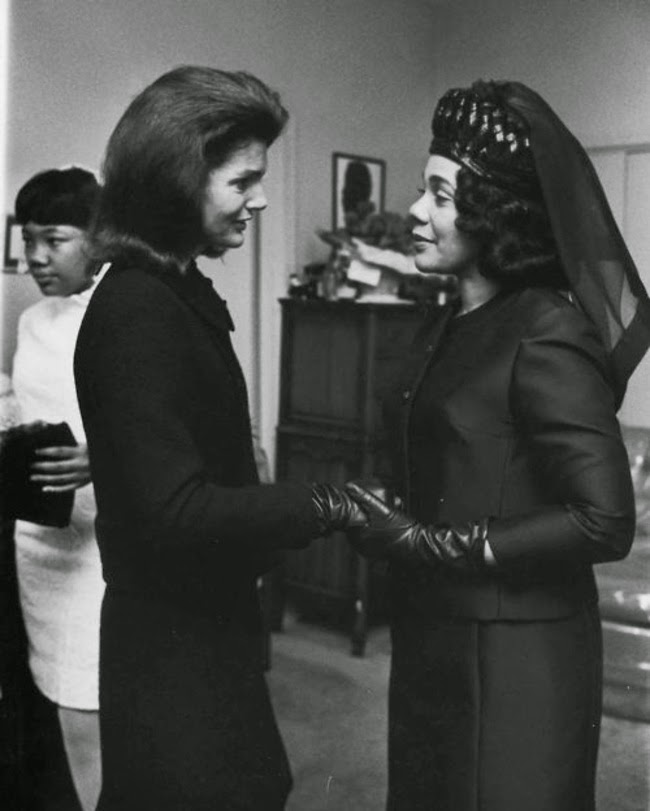