What's so special about this picture of Earth? 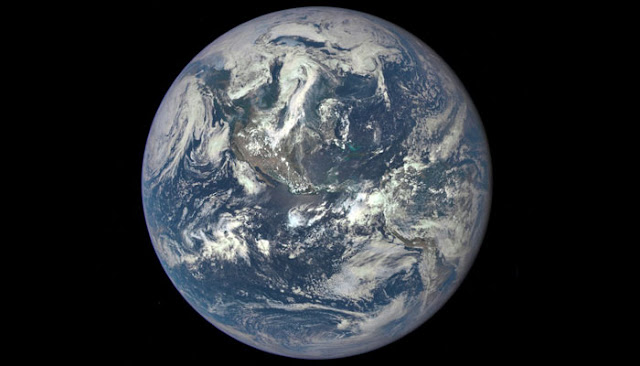 Behold the amazing view of our Earth! Recently, a NASA camera on the Deep Space Climate Observatory (DSCOVR) satellite has returned its first stunning view of the entire sun-lit side of Earth.
DSCOVR is equipped with the Earth Polychromatic Imaging Camera (EPIC) that took the new photo which has been clicked from 1.6 million kms away in space on July 6.
EPIC captures a series of 10 different images in a variety of wavelengths, from near infrared to ultraviolet light, which can be analyzed in a number of different ways.Look carefully and you can see the desert sand structures, river systems and complex cloud patterns on planet Earth.
“This first DSCOVR image of our planet demonstrates the unique and important benefits of Earth observation from space," said NASA administrator Charlie Bolden in a statement.
“I want everyone to be able to see and appreciate our planet as an integrated, interacting system,” he added.The primary objective of DSCOVR is to maintain the nation's real-time solar wind monitoring capabilities, which are critical to the accuracy and lead time of space weather alerts and forecasts.
“DSCOVR's observations of Earth, as well as its measurements and early warnings of space weather events caused by the sun, will help every person to monitor the ever-changing Earth, and to understand how our planet fits into its neighbourhood in the solar system, Bolden noted.
NASA will use the camera's observations to measure ozone levels in Earth's atmosphere and plant growth on the ground.
It will also help build maps showing the distribution of dust and volcanic ash around the globe, among other things.
“The high quality of the EPIC images exceeded all of our expectations in resolution," said DSCOVR project scientist Adam Szabo.
“There will be a huge wealth of new data for scientists to explore,” he concluded.
Posted by pooja