Non-PC Cartoon on Ben Carson and Radical Islam NAILS IT 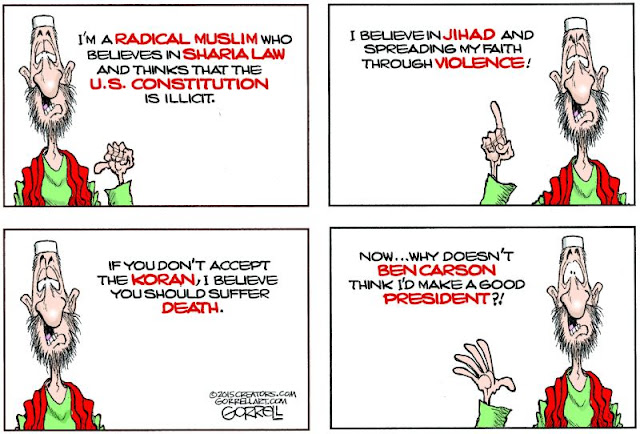 Sierra Marlee reports:
Radical Islamic group Ikatan Muslimin Malaysia recently said that liberalism and Islam could live hand-in-hand if liberals submit to Islam.
Republican Presidential candidate Dr. Ben Carson made a statement on NBC’s “Meet the Press” in which he suggested that he would not agree with putting a Muslim in charge of the United States.

“I would not advocate that we put a Muslim in charge of this nation. I absolutely would not agree with that,” the retired neurosurgeon and Republican presidential candidate said Sunday on NBC’s “Meet the Press.”

He was also asked whether a President’s faith matters.

Carson stated that he didn’t believe Islam is consistent with the Constitution.
The day before this controversial exchange took place, The MaylaMail published an article about radical Islamist group Ikatan Muslimin Malaysia expressing the idea that liberalism must submit to Islam in order for the two ideas to coexist.

“Liberalism can live hand-in-hand with faith, only if it’s willing to live under an Islamic system,” Abdullah said in the Liberalism Conference held by think-tank Institute for Democracy and Economic Affairs (IDEAS).

“If liberalism tries to redefine or reform Islam following the demands of liberal basis, that maybe can never be accepted by Islam.”
Abdullah had equated liberalism to religious pluralism, saying the ideology was borne out of the ancient “dark ages” in the Western world, in response to the domination of the Church.

Does this story support Ben Carson’s viewpoint on a Radical Islamist President? Do you agree with the idea that Radical Islam is not compatible with the Constitution of the United States?
Posted by pooja