Want to cheer yourself up? go for a walk in a cemetery

Thinking about death can actually be a good thing as it leads people to bring positive changes to their lives and help others, a new report showed yesterday. 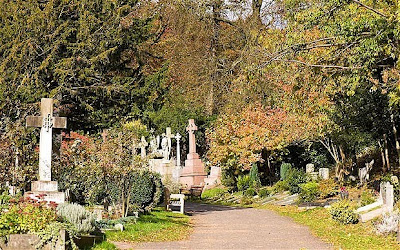 For an awareness of mortality can improve physical health and help us re-prioritize our goals and values, according to the latest analysis of recent scientific studies.

Even non-conscious thinking about death - such as walking by a cemetery - could prompt positive changes and promote helping others, say psychologists.

The report says that past research suggests that thinking about death is destructive and dangerous, fueling everything from prejudice and greed to violence.

Such studies related to terror management theory, which posits that we uphold certain cultural beliefs to manage our feelings of mortality, have rarely explored the potential benefits of death awareness.

"This tendency for TMT research to primarily deal with negative attitudes and harmful behaviors has become so deeply entrenched in our field that some have recently suggested that death awareness is simply a bleak force of social destruction," says Kenneth Vail of the University of Missouri, lead author of the new study in the online edition of Personality and Social Psychology Review this month.

"There has been very little integrative understanding of how subtle, day-to-day, death awareness might be capable of motivating attitudes and behaviors that can minimize harm to oneself and others, and can promote well-being."

The authors pointed to a study by Matthew Gailliot and colleagues in Personality and Social Psychology Bulletin in 2008 that tested how just being physically near a cemetery affects how willing people are to help a stranger.

"Researchers hypothesized that if the cultural value of helping was made important to people, then the heightened awareness of death would motivate an increase in helping behaviors," Vail says.

The researchers observed people who were either passing through a cemetery or were one block away, out of sight of the cemetery.

Actors at each location talked near the participants about either the value of helping others or a control topic, and then some moments later, another actor dropped her notebook.

The researchers then tested in each condition how many people helped the stranger.

"When the value of helping was made salient, the number of participants who helped the second confederate with her notebook was 40% greater at the cemetery than a block away from the cemetery," Vail says.

"Other field experiments and tightly controlled laboratory experiments have replicated these and similar findings, showing that the awareness of death can motivate increased expressions of tolerance, egalitarianism, compassion, empathy, and pacifism."

A study by Zachary Rothschild of the University of Kansas and co-workers in 2009 showed how an increased awareness of death can motivate American and Iranian religious fundamentalists to display peaceful compassion toward members of other groups when religious texts make such values more important.

Thinking about death can also promote better health. Recent studies have shown that when reminded of death people may opt for better health choices, such as using more sunscreen, smoking less, or increasing levels of exercise.

A 2011 study by D.P. Cooper and co-authors found that death reminders increased intentions to perform breast self-exams when women were exposed to information that linked the behavior to self-empowerment.
Posted by pooja