Syria: US clears way for Americans to start donating money to rebels

The US government has quietly cleared the way for Americans to start donating money to buy weapons for Syria's rebels, even as the White House continues to refuse to arm the forces opposed to Bashar al-Assad. 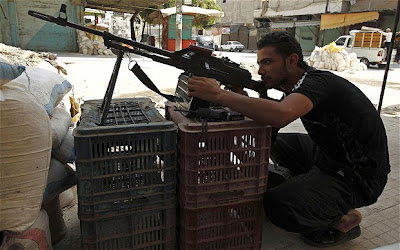 The Syrian Support Group (SSG), a Washington-based organisation with close links to the opposition, has been granted a license by the US Treasury to begin fund-raising on behalf the rebels.

Supporters of the Free Syrian Army (FSA) hailed the move as a "game-changer" in the effort to equip the rebellion with modern weapons capable of matching those of the regime's forces.

Meanwhile, as Mr Assad's troops continued their attack on the strategic city of Aleppo, William Hague described the situation in Syria as "bleak" and conceded there was now little chance of a peaceful resolution to the 17-month crisis.

The Treasury license, allows the SSG to supply the rebels with "financial, communications, logistical and other services otherwise prohibited" by American sanctions on Syria, although it does not permit the group to directly purchase weapons.

"This is a game-changer in terms of funding and a sign of a gradual policy shift by the US government," said Brian Sayers, the SSG'S Director of Government Relations. "We are optimistic that it will help change the situation on the battlefield in a positive way for the FSA."

By allowing American dollars to flow to the secular FSA, the US may also be trying to counterbalance Islamist elements within the opposition, who are building large-scale fund-raising operations in Qatar and other Sunni Arab nations. Some secular rebels complain that by refusing to provide arms and money, the US has ceded influence to the Muslim Brotherhood and other Islamist organisation.

However, Mr Sayers warned that even a reliable stream of modern weaponry would not be enough to allow the rebels to turn the tide against Mr Assad's troops.

"It's not going to be sufficient – even if we raised $50 million for fantastic weaponry it's not going to allow the FSA to defend a safe zone from Assad's fighter aircraft," he said.

The SSG would not reveal how much money it has raised since the Treasury granted the license in late July. It must also file regular reports documenting what money it has passed on to the FSA.

As well as fund-raising, the SSG is actively lobbying the US government to intervene in Syria by establishing a no-fly zone and destroying Syria's Russian-made air defence systems.

The White House remains deeply opposed to such an intervention during an election year and last month The Telegraph disclosed that administration officials had warned the rebels not to expect any US action until after the inauguration in January 2013.

The Treasury's decision to grant the license also creates an unusual situation where private American citizens can help equip an army that the US government is still reluctant to fully back.

The US has so far committed only $25 million of "non-lethal" aid such as communications equipment. The State Department said it had "no position" on individual Americans donating to the rebel cause.

Mr Hague on Sunday said the West did not "want the situation to be resolved by violence" but that it had proved impossible to persuade Russia and China to back international efforts to find a diplomatic path to peace.

"Sadly, we do not have the unity in the [UN] Security Council to put the decisive pressure on the Assad regime," the Foreign Secretary said. He also did not rule out the possibility that Tony Blair, the former Prime Minister, could replace Kofi Annan as the UN-Arab League envoy on Syria.

The resignation of Mr Annan has left hopes of a diplomat solution to the crisis in tatters.

Abdelbasset Seida, the head of the Syrian National Council, sought to fill that void on Sunday stating that the council is ready to negotiate with certain regime officials after President Assad leaves.

“Bashar and his gang must leave and after that we will move to negotiate with other officials whose hands were not stained with Syrian blood and who were not involved in big corruption cases."