We're used to being outraged at what filmmaker Michael Moore spouts off about.  But this Twitter rant from yesterday achieves a sublime level of idiocy unmatched in the annals of Moorisms.

Commenting about the Baltimore riots, Moore made several off-the-wall suggestions on what to do about black poverty, while parroting the racialists' line about white oppression: 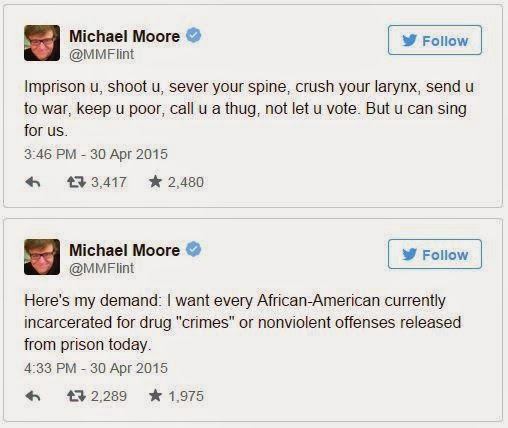 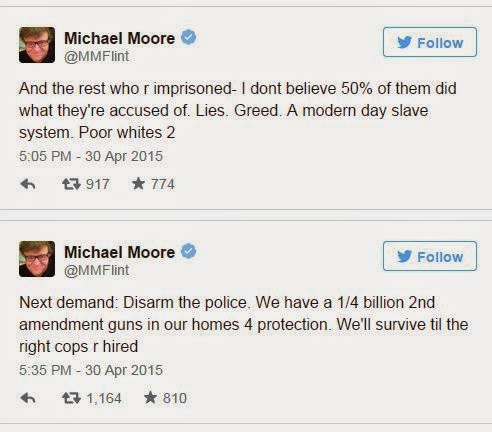 Mary Katherine Ham does us the honor of the takedown:

First, from what position of authority does he make demands? Is he a leader of a movement of some kind? Does he have some kind of leverage I don’t know about? Is he holding someone hostage? Second, as Radley Balko points out, it seems an odd demand that only African-American nonviolent offenders be released. If one feels it’s a moral affront to imprison nonviolent drug offenders—and a surprising number of Americans, even in reddest Texas, do—why just release one race of offenders?

I do like that this rant hinges on a surprise semi-endorsement of 2nd-Amendment and self-defense from the maker of “Bowling for Columbine.” He’s got a point, there. The citizenry of this country is admirably well-armed, making one of his “demands” more possible. No thanks to him.

"Fat, drunk and stupid is no way to go through life, son."  Dean Wormer's advice to Flounder in Animal House should be taken to heart by Moore.