‘A Sad Day for America': Pastor Speaks Out About Sign Claiming Who’ll Be Punished for Homosexuality

Throughout America, businesses and churches often put up roadside signs with folksy sayings, scriptures, or jokes. Sometimes they’ll make bold predictions on when the world will end. Occasionally they’ll cause controversy, as is the case with a sign near Lufkin, TX.
In the wake of the Supreme Court’s ruling on same-sex marriage, business owner Kirk Johnson changed the message on the sign in front of his shop, which is along busy U.S. 59: 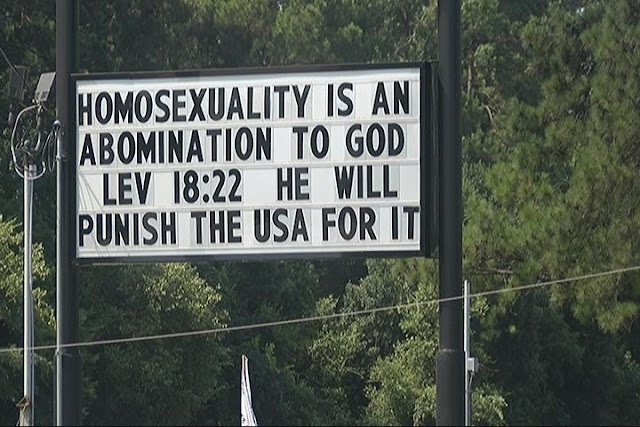 Homosexuality is an abomination to God
Lev 18:22
He will punish the USA for it

Johnson’s pastor Ronnie Frankens said the ruling shouldn’t be a cause for celebration:

“It’s a sad day for America. It’s not a hate crime to preach the Gospel of Jesus Christ. It’s too clear. America will be judged eventually for what we are allowing and what we won’t stand against.”

Though there has been pushback on the sign’s message, Johnson stands by it:

He says he has only received positive messages about the sign’s content.
Posted by pooja