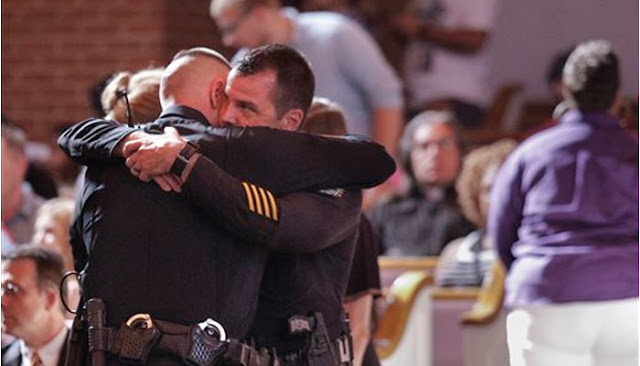 Investigators are searching for evidence that the man who killed four US Marines may have contacted jihadist extremists either online or during overseas travel but so far have found nothing, the FBI said Friday.

Mohammad Youssuf Abdulazeez, 24, opened fire on two military centres in Chattanooga on Thursday, gunning down the four Marines and wounding three people before dying in a shootout with police.
Authorities have said they are treating the case -- a grisly scene reminiscent of other shooting rampages at US military installations -- as an "act of terrorism."
But after a senior US lawmaker suggested the evidence pointed to an attack inspired by the Islamic State extremist group, the FBI warned against jumping to conclusions about a possible motive.
"At this time, we have no indication that he was inspired by or directed by anyone other than himself," FBI special agent Ed Reinhold said of Abdulazeez, a naturalised US citizen born in Kuwait.
The FBI has asked foreign intelligence agencies to help trace his movements and activities abroad, and analysts will be tracing his activity on social media.
"We obviously want to know what his thoughts were and who else he was associating with," Reinhold told reporters.
In an apparent blog post written Monday, Abdulazeez said Muslims should not let "the opportunity to submit to Allah... pass you by," according to the SITE Intelligence Group, which monitors extremist activity on social media.
Michael McCaul, chairman of the US House Homeland Security Committee, said the attack was inspired by the Islamic State group, also known by its acronym ISIS.
"My judgement, in my experience, is that this was an ISIS-inspired attack," McCaul said, vowing the US would have the "final word."
In the wake of the shooting, Defence Secretary Ashton Carter asked for recommendations by the end of next week on how to "ensure the safety of service members and civilians at military installations," Pentagon spokesman Peter Cook said.Investigators were looking at Abdulazeez`s foreign travel, with a reported trip to Jordan last year of particular interest.
Bassam Issa, president of the Islamic Society of Greater Chattanooga, told CNN that Abdulazeez had moved overseas to live with relatives about two years ago.
"My understanding is recently he had come back... and was working with a company in Nashville," Issa told CNN.
The Kuwaiti interior ministry issued a statement Friday confirming that Abdulazeez was born in Kuwait and had last visited in 2010 for three weeks.
The gunman had not given authorities any reason to place him under surveillance prior to Thursday`s attacks, Chattanooga Mayor Andy Berke said.
"We certainly didn`t have any indication that he was a threat or that yesterday something was going to happen," Berke said.Although no motive has been formally established so far, the incident fuelled fears of so-called "lone wolf" actors -- attackers with no known affiliation to an extremist group who are difficult to detect.
"What keeps me up at night is the one case we don`t know about," McCaul said. "This is the event we`ve been most worried about, and then it happened."
US media reports described Abdulazeez as having had a traditional American upbringing, including participation on school sports teams.
He graduated from the University of Tennessee at Chattanooga with a degree in engineering in 2012.
Scott Schrader, who coached Abdulazeez in mixed martial arts, told CNN he "seemed like the all-American kid."
There was evidence, however, that he came from a troubled family.
Divorce papers filed by his mother and obtained by AFP allege that his father beat his wife and five children.
His father was also reportedly investigated for ties to a terrorist group, but ultimately cleared.
Abdulazeez had a brush with the law in April when he was arrested for driving under the influence, local media reported.
He briefly worked at a nuclear power plant in Ohio in May 2013, but was fired for not meeting minimum employment requirements, said a spokeswoman for Perry Nuclear Power Plant operator FirstEnergy. The victims were identified as Gunnery Sergeant Thomas Sullivan, Staff Sergeant David Wyatt, Sergeant Carson Holmquist and Lance Corporal Squire Wells.
Wells joined the Marines last year. The other three men had each served at least two tours of duty in Iraq or Afghanistan.
Shaken residents gathered at memorials to mourn them.
"It hit really hard," said Ansley Chilton, a student at the University of Tennessee-Chattanooga.
"I wanted to come to honour the victims, especially since it was so close to home."
Chattanooga Police Chief Fred Fletcher heaped praise on the officers who helped prevent further loss of life.
He described how an officer who was shot in the ankle was dragged to safety by his colleagues "and bravely returned fire to ensure that he was safe and the gunman remained engaged."
The officer, 17-year-old Dennis Pedigo, "is doing well, he is in good spirits," a family statement read.
Posted by pooja