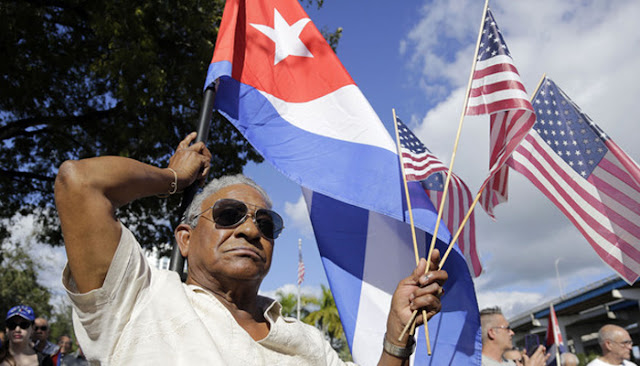 Cuba and the United States formally renewed diplomatic ties Monday, as embassies reopened in their respective capitals, a powerful move toward burying decades of enmity between the Cold War foes.

A foreign policy legacy for President Barack Obama, the historic turnaround between two bitter foes has come about at breakneck pace, in just a matter of months since the two sides agreed to bury the hatchet and work together as equals.
The shift came after Washington acknowledged that its policy of trying to affect change in tightly controlled communist Cuba through isolation and trade restrictions had failed, and that engaging Havana directly was a better way to nudge it towards democracy and prosperity.
For the first time since 1961, the Cuban flag will fly over Havana`s newly upgraded embassy in Washington, just a stone`s throw from the White House.
The standard with a white star inside a red triangle against white and blue stripes will also take its place among a row of flags from around the world adorning the State Department`s imposing marble entrance in the US capital.
In yet another historic gesture, US Secretary of State John Kerry will formally receive his Cuban counterpart Bruno Rodriguez for talks Monday, before holding a joint press conference around 1:45 pm (1745 GMT).
Earlier, Rodriguez will preside over a ceremony to mark the upgrading of the Cuban interests section to a full embassy.
The rapprochement was announced on December 17, as Obama and his Cuban counterpart Raul Castro agreed to end their countries` estrangement and put them on track towards a full normalization of ties.
After a series of negotiations in Havana and Washington, the restoration of diplomatic relations has come about just seven months later.But both nations have cautioned that this is only a beginning, warning that overcoming decades of very bad blood is not easy.
There are "issues that we don`t see eye-to-eye on," State Department spokesman John Kirby admitted Friday.
The United States "wants to move beyond a Cold War-era approach to one of constructive engagement as a way to support and empower the Cuban people," analyst Ted Piccone from the Brookings Institution told AFP.
"Cuba needs the United States as an economic engine for its troubled economy and hopes to attract new foreign investment and human capital to update its socialist model, but without undergoing political reform."
"Building confidence and trust will be critical to the ability to move forward," he added.
One of the biggest areas of contention remains human rights, with Washington pressing for an improvement in freedoms of expression, religion and the press in the Caribbean island nation.
Some Republicans have been sharply critical of what they see as US haste to cozy up with Cuba.
Senator and 2016 presidential hopeful Marco Rubio, the son of Cuban immigrants, vowed to end diplomatic ties with an "anti-American communist tyranny."
"This recognition somehow sends a message to dissidents and others around the world that the United States accepts the Cuban form of government today as a legitimate form of government," he told CNN`s "State of the Union."Another tough issue is compensation for American property seized after the 1959 Cuban revolution led by Fidel Castro. Some 5,911 lawsuits have been opened in the United States with an estimated value of $7 billion to $8 billion.
On Havana`s side, Raul Castro has urged Obama to use his executive powers to "dismantle" the economic embargo in place since 1960, calling it the main stumbling block toward normalization between the two nations.
Washington also wants to ensure the return of several American fugitives wanted in the United States.
Top of the list is a former member of the violent Black Panther revolutionary group, Joanne Chesimard, wanted for the killing of a New Jersey policeman in 1973 and who has been hiding in Cuba since 1984.
The US interests section in Havana will also be upgraded to a full embassy, but with little fanfare as diplomats there await the arrival of Kerry, who is due to officially hoist the American Stars and Stripes over the building in the coming weeks.
Tough negotiations eased one stumbling block, top US diplomat for Latin America Roberta Jacobson said, after insisting that American diplomats be allowed to operate freely across Cuba.
"The security presence outside the intersection has already been reduced... such that we hope people will not feel nearly the same kind of presence or threat," she told lawmakers.
And while American diplomats would still have to provide notification of their travel, they will no longer have to seek permission.
Posted by pooja