Sometimes, we are reminded that great wisdom often comes from the mouths of babes. Sofia Cruz, 5, desperately wanted to deliver a message to the pope about the five million children whose parents could be deported if Republicans get their way, and she managed to get her wish thanks to the kind-hearted pontiff and her own bravery. Cruz traveled from Los Angeles to Washington, D.C. with a singular mission: to hand-deliver a letter to Pope Francis begging him to help her parents stay in the United States.
Despite heavy Secret Service presence, the child climbed over a metal barrier and ran straight for the Popemobile as the Catholic leader approached. The clever, pigtailed little girl attempted to juke past those providing security. Agents managed to nab her before she got very far, but the child’s resolve managed to get the attention of Pope Francis, who waved for Cruz to be brought to him. As the girl was lifted to him, Pope Francis gave her a hug and a kiss.
“The police wanted to move her aside, but the pope asked for his car to stop,” Vatican spokesman Federico Lombardi explained.
Cruz was part of a group of a dozen who traveled from Nuestra Senora Reina de Los Angeles parish in Los Angeles to see the Pope. “She handed the pope a letter asking him to support the drive to legalize undocumented migrants living in the United States,” a parish spokesperson said. She also included a drawing, captioned “My friends and I love each other no matter our skin color”: 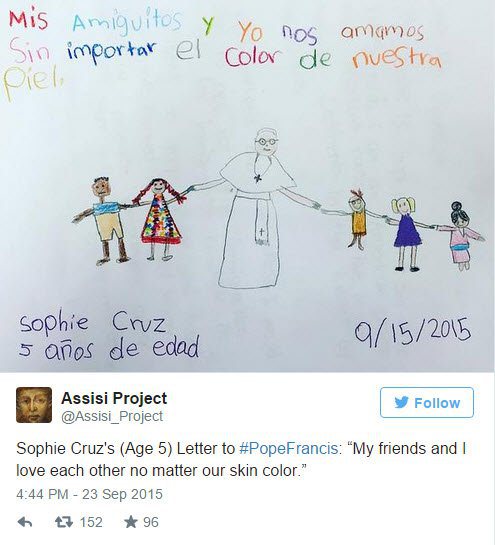 Cruz memorized her letter by heart, both in English and in Spanish. She recited it for The Guardian:

She also presented the pope with a t-shirt that reads, “¡Papa Rescata DAPA!” — a plea for the holy figure to help save a program that would defer deportation for undocumented parents of U.S. citizens like herself. Cruz is one of those “anchor babies” Donald Trump and his fellow Republicans mention incessantly. Both of her parents are from Mexico, but she was born in the United States. As a U.S. citizen, she should absolutely have the right to grow up with both of her parents by her side.
The scene with Cruz and the pope was beautiful. It was exactly what our nation needed to see. Naturally, conservatives want to tear it down. Jim Hoft, architect of the lie about Darren Wilson’s “orbital blowout fracture” and the Dumbest Man on the Internet(seriously, google it), declared that when “anchor baby Sophie Cruz” made her way to the pope, “it was all staged.” That phrase alone was enough to set off his frothing, intellectually-devoid readership base, who swiftly compared Pope Francis to Hitler and demanded that the little girl, who is (we’ll say it again) an American citizen, be deported:

While it is true that the girl’s trip to DC was organized by immigrant advocacy group Hermandad Mexicana Transnacional, a child’s love for her parents is never staged — and the pope, an immigrant himself, is certainly a likely figure to be receptive to a message that families deserve to stay together. On Thursday, the pope urged Americans to embrace immigrants. Whether or not the child’s letter encouraged this remains unknown, but in any case, the pontiff addressed Congress with a message that is certainly in line with the little girl’s touching missive:

“We must not be taken aback by their numbers, but rather view them as persons, seeing their faces and listening to their stories, trying to respond as best we can to their situation. To respond in a way which is always humane, just and fraternal. We need to avoid a common temptation nowadays: to discard whatever proves troublesome.”

“We, the people of this continent, are not fearful of foreigners,” Pope Francis said, “because most of us once were foreigners.”
Watch the brave little girl struggle to deliver her letter — and win — below: