Meme Shows How Much Americans’ Mentality Has Changed 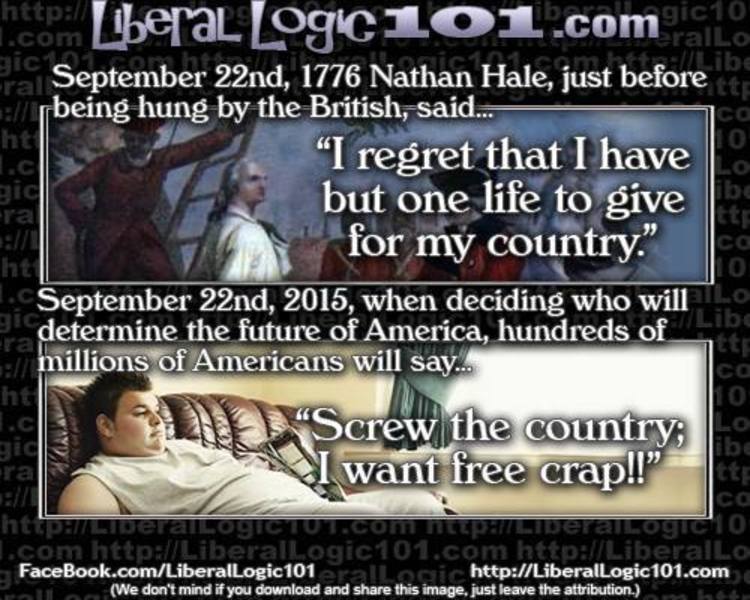 From The Wall Street Journal:

Sen. Bernie Sanders, whose liberal call to action has propelled his long-shot presidential campaign, is proposing an array of new programs that would amount to the largest peacetime expansion of government in modern American history.
In all, he backs at least $18 trillion in new spending over a decade, according to a tally by The Wall Street Journal, a sum that alarms conservatives and gives even many Democrats pause. Mr. Sanders sees the money as going to essential government services at a time of increasing strain on the middle class.

His agenda includes an estimated $15 trillion for a government-run health-care program that covers every American, plus large sums to rebuild roads and bridges, expand Social Security and make tuition free at public colleges.
To pay for it, Mr. Sanders, a Vermont independent running for the Democratic nomination, has so far detailed tax increases that could bring in as much as $6.5 trillion over 10 years, according to his staff.

A campaign aide said additional tax proposals would be offered to offset the cost of some, and possibly all, of his health program. A Democratic proposal for such a “single-payer” health plan, now in Congress, would be funded in part through a new payroll tax on employers and workers, with the trade-off being that employers would no longer have to pay for or arrange their workers’ insurance.

Enacting his program would be difficult, if not impossible, given that Republican control of the House appears secure for the foreseeable future. Some of his program would be too liberal for even some centrist Democrats. Still, his agenda articulates the goals of many liberals and is exerting a leftward pressure on the party’s 2016 field.
The Sanders program amounts to increasing total federal spending by about one-third—to a projected $68 trillion or so over 10 years.
For many years, government spending has equaled about 20% of gross domestic product annually; his proposals would increase that to about 30% in their first year. As a share of the economy, that would represent a bigger increase in government spending than the New Deal or Great Society and is surpassed in modern history only by the World War II military buildup.