'Have You Made The Transfer Yet?': Bad Date Makes Odd Request After Being Turned Down (Photos)

A man’s strange request after being turned down by a woman he dated went viral.
The text conversation, shared by a London pub owner, was between a man and a woman who’d just gone out on a date together. When the man texted her following the date to inquire about a second one, he was politely turned down.
“I am quite a reserved person but wouldn’t want you to change!” she wrote. “Hope you have better luck with future dates!”
The man didn’t take no for an answer, offering to cook for her and saying that he felt they had “potential.”

When the woman turned him down a second time, he requested that she pay him back the $6.83 he spent on her drink.

After bank details were exchanged and the arrangement made to pay him back, the man sent one final nail in the coffin — saying that he was “annoyed” that she refused to “meet up again and give it another chance.” 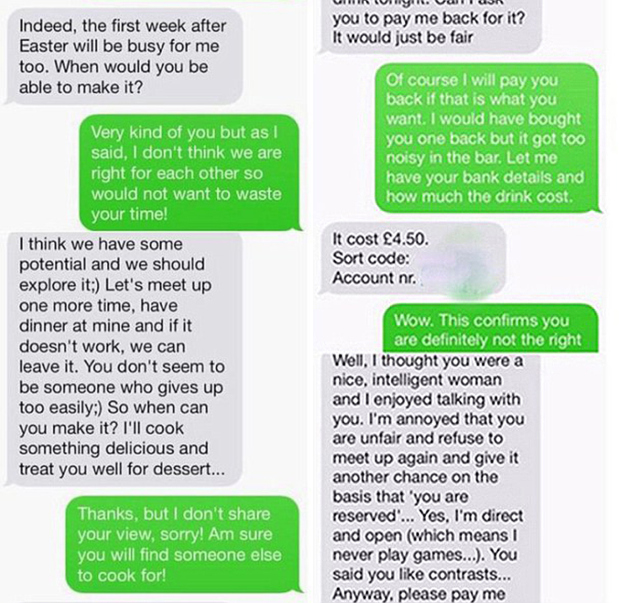 Later, after the conversation had ended, he sent a follow-up text to make sure she made the transfer — clearly not willing to let her forget to pay him back. 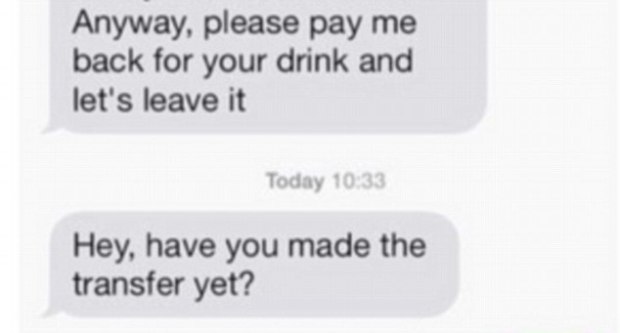 “That man is gross & so pushy,” one viewer said of the conversation on Twitter. “I doubt being alone in his flat is a safe place to be.”
Would you pay someone back for a drink if a date didn't work out?
Sources: Daily Mail, Metro
Posted by pooja