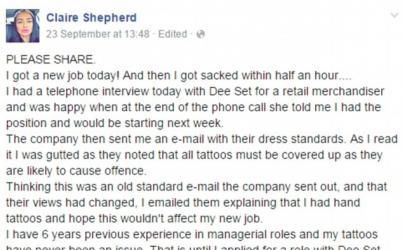 Claire Shepherd landed a job at Dee Set, a United Kingdom-based logistics firm, as a retail merchandiser. Though she was set to begin her new job next week, she was reportedly fired within half an hour after the company discovered she has tattoos that would be difficult to cover up. 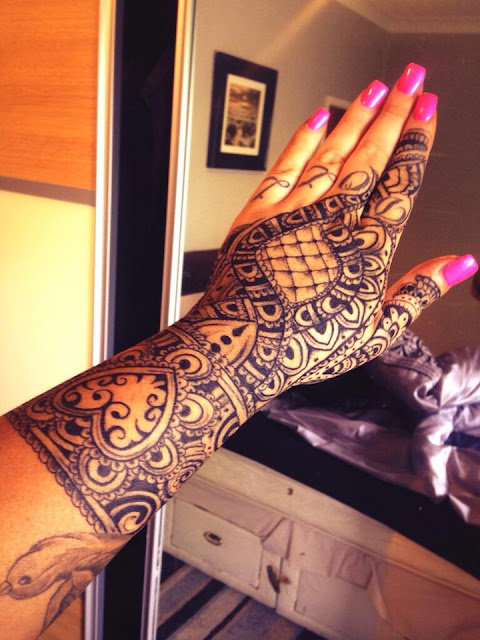 After receiving an email notifying her about the dress code, Shepherd told her employers about the tattoos that adorn her neck and hands and said she hoped it wouldn’t affect her employment, Daily Mail reports.
“I was shocked when they replied and said they would no longer be employing me as I would not be able to cover my tattoos,” she wrote on Facebook. “I was perfect for the job due to my skills, previous experience and flexibility. They clearly thought I had something to offer and would be the right person for the job as they had already offered me the position.”
Shepherd, who has 6 years of experience in managerial roles, also wrote that no employer has ever taken issue with her tattoos. Her story has since gone viral and garnered more than 2,000 shares on Facebook.
In light of the backlash against Dee Set, the company offered Shepherd the position again.
“I'm glad they saw their mistake and corrected it though, that's a step forward,” Shepherd told the Daily Mail.
However, Shepherd decided against taking the job and is now employed at a different retail company.
In a statement to the Daily Mail, Chief Operating Officer Greg Phillips apologized for the incident.
“Deeset is a progressive, equal opportunity employer and recognizes this error in process during our peak recruitment period," he said.
Shepherd hopes the stigma against tattooed workers fades.
“The government want people employed. Maybe they should not allow companies to have outdated policies then,” she said.
“In my opinion, tattoos do not affect your performance or ability to do a job and do not pose a health and safety risk or cause any harm," she added. "It is literally just some color or a picture on your skin.”
Sources: Daily Mail, Claire Shepherd/Facebook
Posted by pooja