Left wing Lunatics Call for a REPEAL of the 2nd Amendment 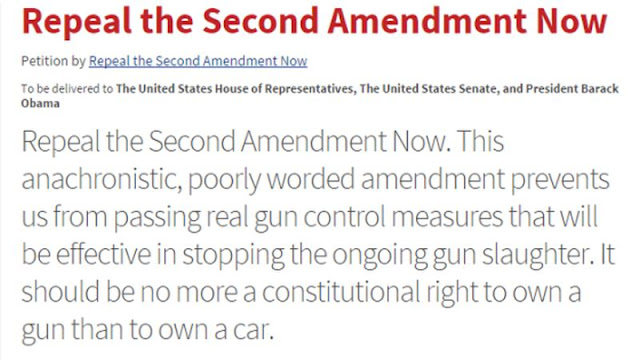 Because you didn’t already think the left was filled with brain-dead pond algae, now you know.
When Obama decided to blame the Oregon shooting on the 2nd Amendment, his ignorant and uninformed supporters decided to take up his charge and SCREAM for the 2nd Amendment to be REPEALED!!!!!!!!!!!!
What these people fail to  understand is that while they are begging for their RIGHTS to be taken away,  the elitists who want to take them away will be fully protected with ARMED SECURITY.
They started a petition on line and people have actually signed on to it. Yes these people are clearly that dumb:

Enough is enough. Americans shouldn’t have to be worried that an irresponsible gun-owning parent’s recklessness will result in the slaughter of their young children at school. We need REAL gun control. Stringent rules such as those in Australia or the UK. Dramatic reductions in the numbers of guns in American homes. In order to do that, we must first repeal the 2nd Amendment, to remove the deadly constitutional right of all Americans to own as many lethal weapons as they desire. Repealing the 2nd amendment won’t automatically make all gun ownership illegal, but it will allow us to move forward and create the rational rules we need for the 21st century.

Some comments from the petition:

And of course took to Twitter to show their stupidity off to the entire world:

Seriously, America. Your time is up with this Second Amendment crap. Gun control is needed and needed now.#Roseburg https://t.co/untXC0Z4QV
— Colin McKinlay (@ColinMcKinlay) October 1, 2015

“The Supreme Court is wrong on the Second Amendment. And I am going to make that case every chance I get.” —Hillary Clinton
— CSM (@usacsmret) October 2, 2015

And some commentary from the people who want to keep their rights FULLY INTACT:

Obama: I dont want to infringe on Second Amendment rights or ban guns but we should do what Britain and Australia do which is…ban guns #2A
— Katie Pavlich (@KatiePavlich) October 2, 2015

And make no mistake, your local left wing legislators are in on the action. They have already been meeting with Obama to help him push is agenda in YOUR state.
These are the same people who want to GIVE rights to people like birth control, welfare and housing. Yet they don’t even want to keep their own fundamental right to self defense in place.
These are the same type of people who fail to remember the horrors of history and do their very best to repeat it.
Posted by pooja