An Oklahoma woman is seeking justice after an ammosexual neighbor took it upon himself to turn his gun on her dogs and pull the trigger. On Monday night, Hayley Booth Lamirand of Choctaw shared terrifying photos depicting her bloodied canine friend Charles Barkley lying on the carpet in obvious agony after she says a man hiding in some bushes opened fire on her pets in front of her child.
According to the post, the dogs had run off and the family was outside calling for them, but the unnamed neighbor cruelly attacked anyway claiming, despite the animals’ close proximity to their owners, that the dogs were trying to make a move for his horses. The gunman fired four shots at the animals, striking Charles in the mouth and Lamirand’s other dog, Apollo, in the back leg.
“You knew we were outside trying to get them home and heard us calling their names, and you still fired shots,” the furious dog owner wrote in a Facebook post. “You could have shot me or my children, had you missed. I have never in my life witnessed something so cruel.”
“To the man who shot my dog today, I hope you burn in hell,” she continued. “I hope you rot with the scum of the earth.” She explained that, while her pets had wandered onto the man’s property, “they wouldn’t hurt a fly.” 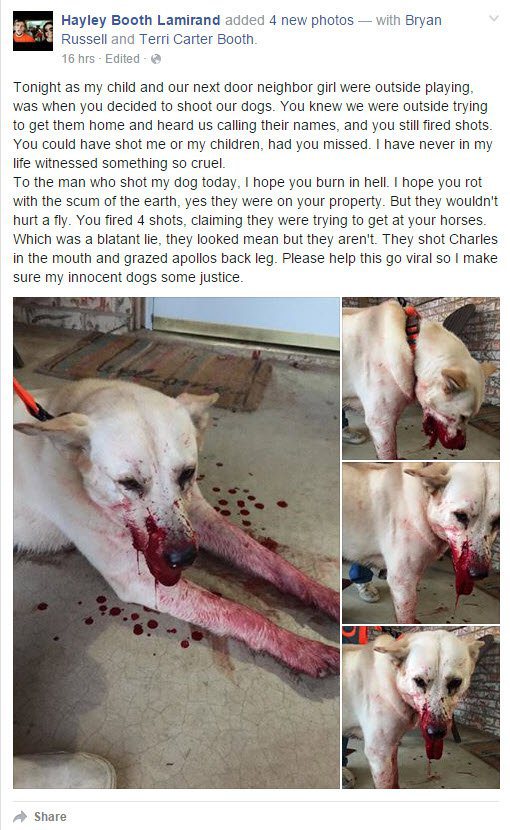 Apollo was treated and returned home safely, but Charles Barkley was not quite so fortunate. Lamirand’s boyfriend, Bryan Russell,posted some awful news. The surgery did not go well for Charles, and he passed away. 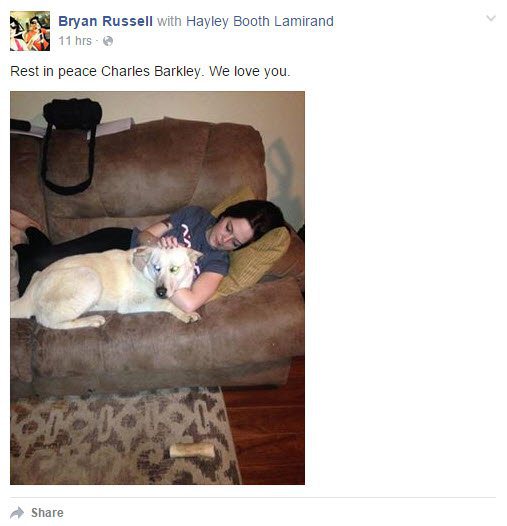 “We are utterly and completely heartbroken. That dog was our baby, he didn’t have very many years left, as he had very bad hip dysplasia,” Lamirand commented, thanking all who reached out to comfort her in the wake of her loss. “So he was hurting constantly, and we were doing everything and anything we could to keep him comfortable. But his life wasn’t meant to end like this.”

She explained that the bullet knocked out some teeth and the spot where Charles was struck could not be repaired, forcing the veterinarian to put the dog down. Now, instead of the comfort of her loving, long-time companion, she awaits her dog’s ashes.

Lamirand says that as she yelled at the man who shot her dogs, it seemed to her as though he was going to open fire on her, as well:

According to Lamirand, the shooter has been charged with reckless endangerment with a firearm, for discharging his weapon maliciously at animals that were harming no one near children and other people. She promises to be there to “make sure the f*cker gets what he deserves.” Since he is charged with a misdemeanor, it is unlikely that it is possible for this “man” to receive the sort of penalty he should for murdering a dog in cold blood and terrorizing a family.

Lamirand is asking for the help of the almighty internet to get her story out in hopes that the man who murdered one dog, attempted to kill the other, and put her family through hell, will receive some actual punishment for his crime.
One must wonder why the man was not, at minimum, charged with cruelty to animals. Under Oklahoma law, animal cruelty is a felony. Each charge would carry up to five years imprisonment:

Any person who shall willfully or maliciously overdrive, overload, torture, destroy or kill, or cruelly beat or injure, maim or mutilate, any animal in subjugation or captivity, whether wild or tame, and whether belonging to himself or to another, or deprive any such animal of necessary food, drink or shelter; or who shall cause, procure or permit any such animal to be so overdriven, overloaded, tortured, destroyed or killed, or cruelly beaten or injured, maimed or mutilated, or deprived of necessary food, drink or shelter; or who shall willfully set on foot, instigate, engage in, or in any way further any act of cruelty to any animal, or any act tending to produce such cruelty, shall be guilty of a felony and shall be punished by imprisonment in the State Penitentiary not exceeding five (5) years, or by imprisonment in the county jail not exceeding one (1) year, or by a fine not exceeding Five Hundred Dollars ($500.00). Any officer finding an animal so maltreated or abused shall cause the same to be taken care of, and the charges therefore shall be a lien upon such animal, to be collected thereon as upon a pledge or a lien.

Hopefully, this woman and her family can find justice for their beloved pets, and the man will receive more than a slap on the wrist for a crime he will surely repeat if he is not dealt with harshly. People who believe in Second Amendment Solutions™ to everything rarely learn their lesson.
Posted by pooja